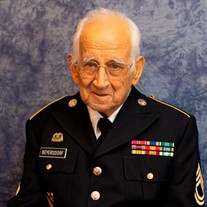 Funeral Services for Adolf will be held at 3:00 p.m., Sunday, May 6, 2018, at Temples-Halloran Funeral Home, 5400 Bush River Road, Columbia, followed by military honors at Bush River Memorial Gardens. The family will receive friends prior to the service at 2:00 p.m. Adolf was born November 06, 1933 in Osnabruck Germany. He was the second of seven children to the late Adolf and Helene Beyersdorf. He came to the States in 1957. After receiving his green card and registering for the draft, he joined the US Army, where he served almost 21 years. During his service, he served in the Vietnam War where he earned the Bronze Star and the Vietnam Cross of Gallantry. He retired as SFC, E7 in 1979. He continued to work another 20 years in the civil service working at the commissary on Ft. Jackson. After his second retirement, he helped raise the grandchildren and enjoyed traveling to Germany the reminder of his years. His passion was food and loved having breakfast with the ROMEO club on Thursdays. He was affectionately known by most as “Opa”. Adolf is survived by his daughters; Helena Beyersdorf-Cottle (Curt) of Alexandria, VA; Erika Huffstetler (Ronnie) of Charlotte, NC and Karen Varnadoe (Chris) of Lexington, SC; grandchildren Nicole Cottle, Samantha Huffstetler, Victoria McDowell (Eston), Bryanna Varnadoe, Jarrett Varnadoe and one Great Grandchild, Farrah McDowell; siblings that reside in Germany Hans-Jurgen Beyersdorf (Monika), Helma Kielczynski. (Hans), Volkhard Beyersdorf (Barbel) and Lena Danielson; three in-laws and twelve nephews and 6 nieces, and his beloved pets Duchess and Mochie. He was preceded by his loving wife of 49 years, Mavis Olean Roscoe Beyersdorf, a sister Waltraud Akkermann, a brother Dieter Beyersdorf, two nephews Meik Jaschke and Chris Roscoe. Memorials can be made to Wescott Acres Pet rescue, Westcott Road and (link for flowers here)

Funeral Services for Adolf will be held at 3:00 p.m., Sunday, May 6, 2018, at Temples-Halloran Funeral Home, 5400 Bush River Road, Columbia, followed by military honors at Bush River Memorial Gardens. The family will receive friends prior to... View Obituary & Service Information

The family of Adolf Walter Rudolf Beyersdorf created this Life Tributes page to make it easy to share your memories.