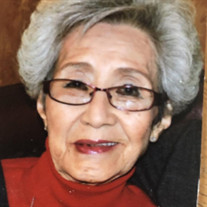 A memorial service for Akiko Beville, 89, will be held at Woodfield Park Baptist Church, 1834 Morninglo Lane, Columbia SC on Monday, November 4 at 1:30, following a private inurnment at Fort Jackson National Cemetery. Akiko passed away on Friday, October 25. Born in Kyoto, Japan, she was the firstborn of nine children to Hachiko and Sato Sakurai. She met and married her husband, Billy and was married for 57 years till his passing in 2012. Her journey with the Lord began when she came to America in 1952. She was baptized in Him on March 16, 1958 in Mims, Florida. She faithfully followed Him all her life and was a diligent student of the Word of God until her death. Akiko modeled her faithfulness to a younger generation, and in her unique way fulfilled Titus 2:3-5. Akiko became involved in Japanese Bible Study associated with Westminster Japanese Church on January 5, 1978, and contributed to it’s development through outreach to the Japanese community and to students at Columbia International University. She’d often provide meals to Japanese students for a “taste of home”while they were far away from theirs. She encouraged them with love and support and impacted the redemption of many. She coordinated pastors’ visits to this group for teaching. Always in attendance at Japanese Bible Camp, she missed only one gathering in the course of 30 annual meetings. Akiko attended and was a member of Woodfield Park Baptist Church from 1961 to her death, where she sang with her beautiful voice in the choir, and taught a Japanese ladies’ Sunday school class for those she’d invited to the church. Surviving are her sister, Sachimi and brother Junji of Japan, son Mickey (Debbie), daughter Barbara Beville of Atlanta, daughter Diane Beville of Atlanta, daughter Janie Beville of Columbia, granddaughter Heather Neeld (CJ) of Hendersonville, NC, granddaughter Isabel Beville of Columbia, SC and great grandson Emmet of Hendersonville, NC, along with many beloved nieces and nephews. In lieu of flowers, memorials may be made to Westminster Japanese Church, 11450 Bowen Road, Roswell, Georgia 30075 or to Woodfield Park Baptist Church.

The family of Akiko S. Beville created this Life Tributes page to make it easy to share your memories.

A memorial service for Akiko Beville, 89, will be held at Woodfield...