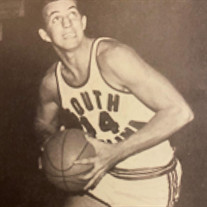 A memorial service for Art Whisnant, 80 of Chapin, will be held Sunday, March 21, 2021, at 2:00 p.m. at the White Rock Baptist Church, 1409 Peace Haven Road, Chapin, SC 29036. The Reverend Glenn Day will officiate. Art was born on July 25, 1940, in Icard, NC, and passed away on Wednesday, March 17, 2021, at Palmetto Health Baptist. He was the son of the late Arthur H. Whisnant, Sr., and Myrtice Berry Whisnant. Art was a long-time member of White Rock Baptist Church. He was a proud graduate of the University of South Carolina, where he excelled on the Basketball Team from 1959-1962. He was a three-time ACC first-team selection in 1962 and earned All-ACC second-team honors in 1960 and 1961. He was named to the ACC all-tournament team in 1962. His 1505 career-points ranks in the top 10 on the Gamecocks' all-time list and attempted a record 880 career free throws. Art was a fifth-round selection in the 1962 NBA draft by the Los Angeles Lakers. He was selected to the University of South Carolina Athletic Hall of Fame in 2001, and the State of South Carolina Athletic Hall of Fame in 2016. He is the grandfather of the 2020 Master’s Champion and the worlds number 1 golfer. Art enjoyed coaching his grandchildren's sports teams and never missed a game or a golf tournament. He loved deep-sea fishing, singing in the church choir, playing the piano, performing magic tricks, and more than anything else, helping others. Those left to cherish his memory include wife of 58 years, Judy Howell Whisnant; daughters, Kandee Johnson of Columbia, and Mirriam Esposito of Deerfield Beach, FL; sisters, Wynelle Nichols, and Renaye Shook; brother, Berry Lee Whisnant (Peggy) all of Icard, NC; grandchildren, Dustin Johnson (Paulina), Austin Johnson (Samantha), Laurie Johnson; Nikki and Halley Esposito; great-grandchildren, Jaden, Carson, Calli, Tatum, and River Johnson. Those who preceded him in death, besides his parents, daughter, Julie Carol Whisnant. In lieu of flowers, memorials may be made to White Rock Baptist Church, 1409 Peace Haven Road, Chapin, SC 29036, and St. Jude Children’s Hospital, 501 St. Jude Place, Memphis, TN 38105.

The family of Arthur "Art" H. Whisnant, Jr. created this Life Tributes page to make it easy to share your memories.

A memorial service for Art Whisnant, 80 of Chapin, will be held...