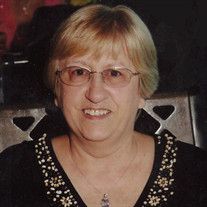 Barbara Ann Steier Hellmann died on Tuesday, November 2, 2021, after a long illness. She was 78. She was preceded in death by her parents, brothers Raymond and John Steier, and sister Lorraine Freeman. Born in the borough of Queens, New York, in 1943, Barbara was the ﬁfth of seven children of Albert Steier and Marie Koestner Steier. After a period living on Long Island, the family moved to Albion, in upstate New York, when she was in fourth grade. It was a bit of a culture shock to move to such a small town, where the number of kids at home were almost as many as in her class. Her parents built a small restaurant with a gas station and motel, and later added automotive repairs. Known as "Bobbie Ann" to her sisters, they were a close family, and held large family reunions every summer as adults. Barbara graduated from Albion Central High School in 1960, then attended SUNY Albany and SUNY Brockport before starting work at a local bank. She was later transferred to Buffalo, where she met her husband, Richard William "Dick" Hellmann, who worked at the same bank. They were married in June of 1969. After a stop in New Jersey, in 1973, they moved to Irmo, South Carolina, for Dick's work. Barbara and Dick had two sons. In South Carolina, Barbara worked as a tax preparer and ofﬁce manager at H&R Block before starting her own tax preparation business, which she operated until she retired. She still found time to be Den Leader for her two Cub Scouts, both of whom would earn Eagle Scout. She enjoyed gardening, growing vegetables with her boys when they were young, and watching and identifying the many birds who visited her feeders. Each year, she loved setting up her Christmas Snow Village, which grew to ﬁll a whole room in her house every season. She was a member of Dutch Fork Christian Church, and later was a devout member of the Palmetto Church of Christ, hosting and participating in study groups. dinners, and other church activities. Her friends there will miss her. Few things gave Barbara as much joy as becoming a grandmother. Despite the distance, she would travel regularly to Pennsylvania for birthdays and holidays, and loved taking them on Disney vacations, both to the park in Orlando and on a cruise when they were older. Her grandchildren enjoyed coloring Easter eggs and playing board games with her, and will miss her visits. Barbara is survived by her husband of 52 years, Dick Hellmann; two sons, Douglas (Theresa Flynn) of Athens, Georgia, and William (Melissa) of Lansdale, Pennsylvania; four grandchildren, Joshua, Andrew, Ashlyn, and Lillian Hellmann, also of Lansdale, Pennsylvania; her sisters Marie Rigg (Thomas) of Middletown, Delaware; Irene Braley (Richard) of Albion, New York, and Eleanor Thompson of St. Augustine, Florida; 19 nieces and nephews; a multitude of great-nieces and great-nephews; and many caring friends. The family would like to express sincere thanks to Kaitlyn Cureton, Carol Jones, Erica Moore, Aldrena Muller, and Simone Williams for their kind care and assistance these last few months, and to hospice nurses Brandi Gunter and Joanie McElwain for their attentiveness these last few weeks. The family will receive visitors at 10 o’clock a. m. on Saturday, November 13, 2021, at Temples-Halloran Funeral Home, 5400 Bush River Road, Columbia, SC. A celebration of Barbara’s life will follow at 11 o’clock a. m. in the funeral home chapel. Properly worn masks (covering both nose and mouth) are required inside the funeral home. A private burial at Fort Jackson National Cemetery will occur at a later date. In lieu of ﬂowers, memorials may be sent to Palmetto Church of Christ, 7000 Nursery Road, Columbia, SC, 29212.

Barbara Ann Steier Hellmann died on Tuesday, November 2, 2021, after a long illness. She was 78. She was preceded in death by her parents, brothers Raymond and John Steier, and sister Lorraine Freeman. Born in the borough of Queens, New York,... View Obituary & Service Information

The family of Barbara S. Hellmann created this Life Tributes page to make it easy to share your memories.