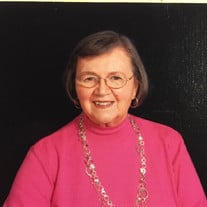 COLUMBIA—Barbara Corbett Streett, widow of Richard M. Streett passed away on Friday, September 18, 2020. Barbara was born June 4, 1935, in her grandmother Seigler’s house in Aiken County (New Holland). She was the daughter of the late Kennerly R. and Winnie Seigler Corbett. Her father started working for the FBI in 1936 in Washington, DC. Her early years were spent there as well as Dallas, TX, and Cincinnati, OH. Her High School years were spent in Florence, SC where she met Richard. She was a graduate of McClenaghan High School and Carolina College of Commerce. She worked as a paralegal for Lewis Cromer, McNair Law Firm, and Nexsen Pruet until her retirement. She enjoyed her work with Trinity Episcopal Church where she often helped with breakfast for those in need. She enjoyed bridge, Garden City Beach and Disney World. Barbara enjoyed her wonderful neighbors of 50 years and their get-togethers, her many dogs and cats. She was the beloved mother of R. Martin Streett, Jr. of Columbia, Robert A. Streett (Dawn Gibson); grandmother of Jordan Streett and Robbie Streett, Jr., All of Chapin; sister to Brenda Corbett Haile; much-loved aunt to Rebecca (David) Wiggins and children, Christopher, Mattie, and Corbet and Robert W. Haile, Jr., (Kristin) and children, Teagan and Andrew all of the Charleston area. She also leaves behind many cousins and her very special dog, Tucker who stayed by her side every day. In lieu of flowers, memorials may be made to The Alzheimer’s Assn., 140 Stoneridge Drive, #210, Columbia, SC 29210 or The Animal Protection League of South Carolina, PO Box 5354, Columbia, SC 29250. A graveside service for Barbara Streett will be held at 11:00 a.m., Monday, September 21, 2020 in Bush River Memorial Gardens. Due to the COVID-19 virus, we require everyone to wear a mask and social distance.

COLUMBIA&#8212;Barbara Corbett Streett, widow of Richard M. Streett passed away on Friday, September 18, 2020. Barbara was born June 4, 1935, in her grandmother Seigler&#8217;s house in Aiken County (New Holland). She was the daughter of the... View Obituary & Service Information

The family of Barbara Corbett Streett created this Life Tributes page to make it easy to share your memories.