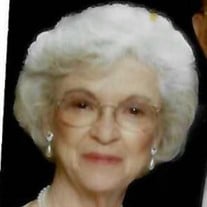 Betty Taylor was born in Caldwell on the 9th of May 1930. She was the daughter of the late John Garver and Bessie Lorraine Larson Garver. She grew up in Herrington, KS. Our mother was a kind Christian Lady who loved God and her family. She was loved and respected by all who met her. A lady in the purest sense of the word. To personify her we would say she embodied Dorthey, for her innocence and kindness; Auntie Em for her caring and faithfulness; and Grace Kelly for her sense of grace, etiquette, and style. Our mother was accomplished in many respects. She was an award-winning cook/baker/chef. Her pies won several awards, and her spaghetti was acclaimed by our Italian American friends. Our Christmas and holiday dinners were always an adventure ranging from the standard turkey dinners to crab legs and Beef Wellington. She was a master gardener and was active with the Gardendale and Coldstream Garden Clubs. She was proud of the work she did with the Blue Star Memorials. She was a talented artist and pursued her passion for art in various mediums. She enjoyed embroidery, needlework, designing and making clothes. Her other mediums included oil painting, ceramics, and crafting. One of the highest complements she received was from her neighbor who was a model from Germany who helped open the first fashion house in New York. Ruth stated that she lived in New York and interacted with all echelons of New Yorkers and that our mother Betty was a true lady, and that she treated her like royalty when she visited our house. She stated that our mother’s table was set perfectly from the place settings to the centerpieces and the presentation of the food. Our mother was proud of being a member of the Rainbow Order of Girls. Finally, our mother was proud of the fact that she was the 2nd cousin of Amelia Ehrhart. Our grandmother was an Ehrhart. She was also related to President McKinley. She is survived by her daughter, Denise Taylor Salyer (Edward), son, Thomas Russell Taylor; two grandchildren, Lauren Salyer Rivers (Michael) and Thomas Salyer; two great-grandchildren, London Rivers and Lillian Rivers; sister, Nelda Watson (Jerry); brother, Stanley Garver (Penny) along with several niece and nephews. She was preceded in death by her husband of 65 years, Thomas S. Taylor, and a brother, L.E.Garver. Go with God and be at peace, we all love you. A cryptside service will be held for Betty at 2:00 p.m. Sunday, February 7, 2021 in Bush River Memorial Gardens Mausoleum, 5400 Bush River Road, Columbia, SC 29212.

Betty Taylor was born in Caldwell on the 9th of May 1930. She was the daughter of the late John Garver and Bessie Lorraine Larson Garver. She grew up in Herrington, KS. Our mother was a kind Christian Lady who loved God and her family. She... View Obituary & Service Information

The family of Betty Jean Taylor created this Life Tributes page to make it easy to share your memories.