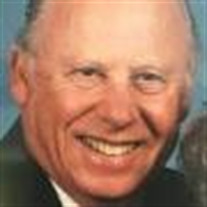 Bruce Stetson Loring, 84 of Columbia, passed away on Monday, May 14, 2018. Born August 29, 1933 in West Greenwich, Rhode Island. He was the son of the late Paule Stetson Loring and the late Virginia Craig Loring. Bruce graduated from the University of Rhode Island with a Bachelor of Science in Accounting in 1955. While in college he was an avid member of the University of Rhode Island sailing team. Upon graduation he represented the United States and competed in England against the top sailing teams in England. He served in the Army reserves and later moved to Charlotte North Carolina where he met his wife of forty one years, Marilyn Myers. They were married August 16, 1958. They relocated to Columbia South Carolina in 1963. Bruce and his family were extremely active in the sailing community throughout the Southeast. He helped initiate the collegiate sailing programs for the southeastern colleges and universities. Over his life he competed in various types of sailing boats throughout the United States, but the Y-Flyer class was his favorite. He won four national championships in the Y-Flyer class. In 1980 he was invited to participate in the Champion of Champions regatta outside of Dallas, Texas. He was a lifelong member of the Columbia Sailing Club and a member of the Yacht Cove Church. He shared his love of sailing with his family and friends every day of his life. Bruce is a retired executive from the Industrial Sales industry. The proudest accomplishment of his life are his children and grandchildren. He is predeceased in death by his wife Marilyn Myers Loring. He is survived by his daughter, Lynne Loring Kerrison (Buist) of Charleston, South Carolina, Steven Stetson Loring (Christiane) of Fleming Island, Florida and David Myers Loring (Alli) of Charleston, South Carolina. He is also survived by his brother, Ron Craig Loring (Redick) of Lexington. He has seven grandchildren, Mary Lynne Kerrison, George Buist Kerrison, Gabriel Stetson Loring, Rachel Esperanza Loring, Emily Loring, Ashton Loring and Molly Aiken Loring. The Family wants to thank all of his friends and neighbors at Yacht Cove especially Jim Maner for all of the love, care and support. A Celebration of Life Service will be held for Bruce at 4:00 p.m., Thursday, May 24, 2018 at Yacht Cove Club House, 109 Shoreline Drive, Columbia, SC 29212. The family will greet friends following the service at the club house. In lieu of flowers, memorials may be made in Bruce Loring’s honor to LCRAC Meals on Wheels, 125 Parker Street, Lexington, SC 29072 or online at: Lexington County Recreation & Aging Commission Donation Website: http://www.lcrac.com/Default.aspx?tabid=369220

Bruce Stetson Loring, 84 of Columbia, passed away on Monday, May 14, 2018. Born August 29, 1933 in West Greenwich, Rhode Island. He was the son of the late Paule Stetson Loring and the late Virginia Craig Loring. Bruce graduated from the University... View Obituary & Service Information

The family of Bruce Stetson Loring created this Life Tributes page to make it easy to share your memories.

Bruce Stetson Loring, 84 of Columbia, passed away on Monday,...