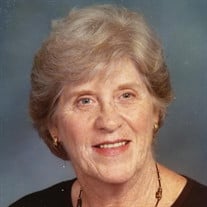 Carolyn Marie McQuinn, died Sunday, May 9, 2021, and will be laid to rest Saturday, May 15, 2021, in Woodridge Memorial Park, 138 Corley Mill Road, Lexington, SC. Family and friends will gather under the Woodridge Gazebo at 10 AM to celebrate her life. Rev. Dr. Chris Denny of Westminster Presbyterian will preside. Temples-Halloran Funeral Home is handling the arrangements. Carolyn Marie Jones was born in Lancaster, PA on December 18, 1941, to Fred and Hilda (McGinnis) Jones. After graduating from Conestoga Valley High School in 1959, Carol, as she was known to friends, joined the U.S. Air Force, where she trained in aerial photography. While in the military, she met her husband James McQuinn of Hurley, Virginia. They wed in September 1961 in Wichita Falls, TX. After leaving active military service, the McQuinns moved to Chicago, IL, where they welcomed their son, Russell, in 1966. In 1968, the family moved to the Columbia, SC area, where they welcomed daughter Sarah in 1973. It was the Midlands of South Carolina where Carol made her home for the rest of her life, first in the South Congaree area, then for many years on Lake Murray in Lexington County, and finally in Columbia for the last two decades. She was employed for many years at the R.L. Bryan Company, where she worked both in the executive suite and the state textbook depository. After retiring from there, Carol worked for several more years at Star Music Company, where she assisted families with renting musical instruments for their students. Carol was known for her quick wit, her kindness, and her many skills and abilities that ranged from bowling to knitting to fishing. Her dedication to her family and friends knew no limits; she was always there for them in times both good and bad. Carol is survived by her son, Russell McQuinn (Vanessa), and daughter, Sarah Conrad (Brock III). She also leaves behind her brother Fred Jones of Lancaster, PA, and three grandchildren: Victoria McQuinn, Kathleen Conrad, and Nathaniel Conrad. She was predeceased by her parents Fred and Hilda Jones, her husband Jim, and her daughter-in-law Kimberly Burrell McQuinn. Carol was an avid gardener and nature lover. In her honor, memorials may be made to the Green Team at Westminster Presbyterian Church, the SC Wildlife Federation, Riverbanks Zoo and Gardens, or the Audubon Society. The family would like to offer special thanks to those who helped provide care for Carol in her later years, especially Gail Phillips and Amy Jones.

Carolyn Marie McQuinn, died Sunday, May 9, 2021, and will be laid to rest Saturday, May 15, 2021, in Woodridge Memorial Park, 138 Corley Mill Road, Lexington, SC. Family and friends will gather under the Woodridge Gazebo at 10 AM to celebrate... View Obituary & Service Information

The family of Carolyn Marie McQuinn created this Life Tributes page to make it easy to share your memories.