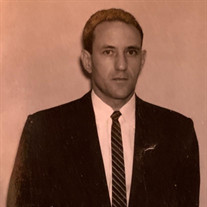 Charles Bennett Kearse, Sr. June 2, 1932-- December 24, 2020 Charles Kearse passed away December 24th after a lengthy illness. He was born June 2, 1932 in Spartanburg, SC. to W.S. and Martha Montjoy Kearse. His family later relocated to Rockingham, NC, where he spent his early years. He was educated in NC schools. Upon graduation, he entered the US Army, as did so many during the Korean War. After completing his military service, he returned to NC where he was reunited with his high school sweetheart, Shirley Heeney. They married and moved to Columbia, SC where he completed his education and began his career. Upon his retirement from American Filtrona Corporation, they built a home at their beloved Folly Beach. For the remainder of his life, he divided his time between the two places he loved most, Folly Beach and Irmo. Church was always an important part of his life. Until moving to Folly Beach, he was an active member and deacon at First Baptist Church of Columbia. After moving to Folly Beach, he attended Folly Beach Baptist Church. Charles loved football, bridge, eating out with friends, his Bible, and the beach. A true Southern Gentleman, he was the ultimate family man. He adored his grandchildren and the feeling was mutual. Charles was predeceased by his parents, 4 sisters and 2 brothers. He is survived by his wife Shirley, daughter, Angela Smith ( Barry), son, Charles “Chuck” Kearse, Jr .(Kathy), grandchildren Chase Smith and Meredith Kearse, 2 sisters, Norma McKee and Elizabeth Bell, numerous nieces and nephews, and special family friend, Rose Henderson. Due to COVID, a private graveside service is planned. No further plans are announced. In lieu of flowers, memorials may be made to: Folly Beach Baptist Church 77 Center St. Folly Beach, SC 29439 or Impact International 1734 Holly Hill Dr. West Columbia, SC 29169 The family is being assisted by Temples-Halloran Funeral Home. Memories and condolences may be shared through the funeral home website https://www.templeshalloranfuneralhome.com/

The family of Charles Bennett Kearse created this Life Tributes page to make it easy to share your memories.