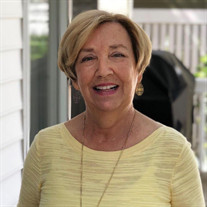 A Funeral Mass for Christine “Chris” Blaze King, will be held at 10:00 am at The Basilica of Saint Peter, 1529 Assembly Street, Columbia, SC 29201 on Monday, March 8, 2021. The Very Reverend Canon Gary S. Linsky, V. G. Pastor will officiate. The inurnment will follow in the columbarium at the church cemetery. Mass will be live-streamed on www.visitstpeters.org. The family will receive friends following Mass in Neglia Hall for a bereavement meal. Chris was born on January 8, 1950, in Columbia, SC, and went to her heavenly home on February 26, 2021 at the age of 71. She was the daughter of the late Ludwig Blaze and Vivian Fabrizio Blaze. Chris was a graduate of Eau Claire High School, Class of 1968. She attended both Midlands Tech and the University of South Carolina. Chris was a member of The Basilica of Saint Peter. She also was a parishioner of St. Frederick & St. Stephen Catholic Church of Edisto Island, SC. Chris retired in 2011 from SC Bank & Trust where she was Vice President, Mortgage Lending. During her career and in her retirement, Chris held many volunteer positions. She was a volunteer for the USO – South Carolina and served on their Advisory Board. She was a former member of Junior Women’s Club of Columbia, Greater Irmo Chamber of Commerce and The Rotary Club of Lake Murray – Irmo. She was past President of the Mortgage Lenders Association of Greater Columbia. She served as the Membership Chairperson for the Edisto Island Chapter of the Colleton County Clemson Club. Additionally, she served in many leadership roles for various PTO organizations while her children were in school. Survivors include her loving husband of 50 years, Ted D. King of the home; daughter, Stephanie King Devaney (Neil) of Irmo; son, Troy King (Rebecca) of Randolph, NJ; brothers, Louie Blaze (Barbara) of Fairhope, AL and Thomas Blaze (Terry) of Escondido, CA; grandchildren, Coleman and Lauren Devaney and Weston King. She was preceded in death by her parents and a brother, Robert Blaze. Memorials in Chris’ name may be made to USO South Carolina, 3250 Airport Blvd., Suite 7, West Columbia, SC 29170 or The Babcock Center Foundation, P.O. Box 4389, West Columbia, SC 29171.

The family of Christine "Chris" Blaze King created this Life Tributes page to make it easy to share your memories.

A Funeral Mass for Christine “Chris” Blaze King, will be held...