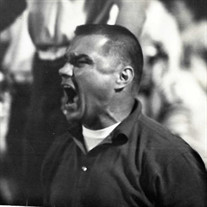 The funeral service for Coach Frank R., Singleton, Sr., 94, of Chapin will be held on Sunday, January 24, 2021, at 2:30 p.m. in the Sanctuary of Chapin Baptist Church. The family will receive friends at 1:30 p.m. until the hour of the service. Reverend Michael Hull and Reverend Philip Vaughn will officiate. Burial will follow at Chapin Baptist Church Cemetery with honors by the United States Navy. Please follow COVID-19 precautions by wearing a mask and practice social distancing. Coach Frank, also known as PopPop to family and friends, was born on October 1, 1926, in Sumter and passed away on January 12, 2021. He was the son of the late William Joseph Singleton and Pauline Kvaternik Singleton. Frank proudly volunteered to serve his country in the US Navy during WWII. He was then recalled serving a tour during the Korean conflict. After WWII, he returned to finish high school at Edmunds High in Sumter, SC where he met his wonderful wife the late Jackie Fulmer Singleton. He then went to the University of South Carolina where he played football, boxed for the USC boxing team, and became a member of the USC Letterman’s Association. He graduated from the University of South Carolina with both a bachelor’s and a master’s degree in Education. On December 8, 2011, Coach was inducted into the Sumter Sports Hall of Fame. In 2017 he was honored on the field during the halftime show for the “Military Appreciation Day”. He was a former member of the First Baptist Church where he served as a deacon, and a Sunday School/Training Union teacher. Also, he was a longtime member of Chapin Baptist Church. “Coach” taught PE for Richland School District One at Gibbes Jr High, Eau Claire HS, and Columbia HS. He coached B squad football and assisted with the JV team as well as the varsity football at Eau Claire. Frank was part of the coaching staff that included Art Baker, Jimmy Satterfield, Steve Robertson, Dick Sheridan, Bobby Johnson, Jim Woodard, George Glymph, and Leonard Shealy to name a few. Those were the glory years at Eau Claire, and those former coaches will tell you that it was Coach Shealy and Coach Singleton that set the standards from the B team-up. He later served as Athletic Director at Columbia High School. He was a long-standing member of FCA (Fellowship of Christian Athletes) in the Columbia area and took many young men to the FCA summer camps in Black Mountain, NC. Frank was an avid golfer and a member of MCCC since 1974 where he shot his first hole in one on the 16th hole at the ripe age of 85. Coach loved God, his really BIG family, and his friends while making them laugh and smile. He also loved to help people any way he could. He was an ordinary but extraordinary man who left a lasting mark on your heart. From the first time you met Frank, you became part of the “family”, and rest assured you were picked on and included in all his family get-togethers. The love, compassion, and impact he made in our lives may never be fully known, but what we do know is that he will forever be a part of our lives. Our family is exceedingly grateful for the Eau Claire family that has continued to contact and visit Pop these past years and it is a testament to the love they have for Coach. He loved to have fun and “cut up.” You might catch him around town on St Patrick’s Day dressed as a leprechaun or in a red and white striped outfit at Christmas. Another way he made people smile was with his baking. He thoroughly enjoyed making his famous fruitcake and cheese straws. He won numerous ribbons at the SC State Fair including a blue ribbon for his fruitcake. He was still making fruitcakes for Christmas 2019. His jams, jellies, and pimento cheese were also huge favorites. All of these goodies he loved giving away as much as he did making them. One of his very favorite activities was our family vacations at the beach. Needless to say, those weeks and our memories were priceless! Survivors include his spouse, Joanne Campbell; daughters, Cindi S. Esarey (David), Sheri S. Morris (Mike), Sheena S. McKeon (Paul) and Stacye Singleton; son, Rick Singleton (Connie), adopted daughter Maria DeRitis, Billy Campbell (Lisa), Nancy Campbell, Beverly Sheerer, sister, Tona W. Chandler (Pat); brother, Bob Singleton (Jane); grandchildren, Dave and Adam Esarey, Shannon Briggs, Brent, Matthew, Andrew, and Austin Morris; Helen McKeon, Christian, Cameron, and William Singleton; Ryan and Jonathan Campbell; great-grandchildren, Samuel and Glory Esarey, Nathan, Miles, and Scarlet Briggs, Samuel, Aviva, Henna, Connor, Alayna, Camden, and Kane Morris. He was preceded in death by his parents, his first wife Jackie F, Singleton, 13 brothers and sisters, and grandson Justin Morris In lieu of flowers, memorials may be directed to FCA. https://myfca.org/carrollbaker The service will be live-streamed on the Chapin Baptist Church Facebook site.

The funeral service for Coach Frank R., Singleton, Sr., 94, of Chapin will be held on Sunday, January 24, 2021, at 2:30 p.m. in the Sanctuary of Chapin Baptist Church. The family will receive friends at 1:30 p.m. until the hour of the service.... View Obituary & Service Information

The family of Coach Frank R. Singleton, Sr., created this Life Tributes page to make it easy to share your memories.