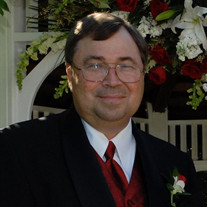 WEST COLUMBIA—Dennis Ray Weed passed away on Sunday, February 18, 2018 in West Columbia, SC at the age of 64 from complications of diabetes. Dennis was born on May 27, 1953 in Irmo, SC to his parents Willie Horace Weed, Sr. and Nellie Marie Harrison Weed. He graduated from Irmo High School where he played football for the Yellow Jackets. He attended University of South Carolina receiving a BS degree in Engineering in 1976. He worked as a Chief Mechanical Officer for Norfolk Southern and Union Pacific Railways then transitioning to the railcar leasing side with Chicago Freight Car and Leasing in 2002. He retired in 2015 and moved back to South Carolina to be with his family and friends. Dennis was a kind and generous man with a passion for playing golf. He won the Putt-Putt National Championship in 1975. He will be dearly missed by all who knew him. Surviving in addition to his wife of 41 years, Karen Diane Weed; daughter, Lynn Marie Weed Vasquez (Jason); sisters, Phyllis Bray-Hoffman (Eli) and Brenda Ferri (Edward); sister-in-law, Flora P. Weed; granddaughter, Elliana Marie Vasquez; nephews, Clinton and Travis Weed, Michael Ferri and niece, Shannon Cochran. Those who preceded him in death besides his parents is one brother, Willie H. Weed, Jr. There will be a visitation at Temples Halloran Funeral Home, 5400 Bush River Road, Columbia, SC 29212 on Tuesday, February 20, 2018 from 2:00-3:30 p.m. followed by a private graveside service, conducted by Reverend Glenn Boland. Also there will be a Celebration of Life Memorial Service at St. David Lutheran Church at a future date. Memorials may be made to the American Diabetes Association of SC, 107 Westpark Blvd #220, Columbia, SC 29210 and/ or St. David Lutheran Church, 132 St. Davids Church Road, West Columbia, SC 29170.

WEST COLUMBIA&#8212;Dennis Ray Weed passed away on Sunday, February 18, 2018 in West Columbia, SC at the age of 64 from complications of diabetes. Dennis was born on May 27, 1953 in Irmo, SC to his parents Willie Horace Weed, Sr. and Nellie... View Obituary & Service Information

The family of Dennis Ray Weed created this Life Tributes page to make it easy to share your memories.