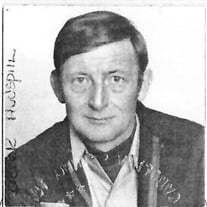 Columbia—Derek Hudspith, born January 3, 1941, passed away peacefully at home on December 6, 2019, after a courageous battle with lung cancer. The family and friends will join in a celebration of his life at a later date. He is pre-deceased by his parents, Jabez and Henrietta Hudspith, of Blyth in Northumberland, England. He is survived by his loving wife of 53 years, Barbara J. Hudspith; two brothers, Dennis Hudspith of Winnipeg, Canada and David Hudspith of Myrtle Beach, SC. Also his four beloved dogs, Samantha, Will, Mikey, and Grace. After retiring from Dougherty Equipment Company, he enjoyed spending time working in his yard, playing with his dogs, many home projects, and was always ready to lend a helping hand to neighbors, friends and family. During his fifteen years of military service with the British Army in the Corps of Royal Electrical and Mechanical Engineers (R.E.M.E.), he was stationed at Chepstow in Wales, as well as in Germany, Kuwait and Bahrain. He completed his military service in England at Salisbury Plains, attached to the 16th/5th Queens Lancers. He was passionate about Soccer, having played as a goalkeeper for his army team and followed the sport avidly during his retirement. The family would like to thank the staff at Lexington Medical Center, the Lowman Home, South Carolina Oncology, and Heartstrings Hospice for all their help and guidance. In lieu of flowers, memorials may be made in his name to Pets, Inc., PO Box 6394, West Columbia, SC 29170, Pawmetto Lifeline, 1275 Bower Pkwy., Columbia, SC 29212 and South Carolina Humane Society, 121 Humane Lane, Columbia, SC 29209. Temples Halloran Funeral and Cremation Services is assisting the family with funeral arrangements.

Columbia&#8212;Derek Hudspith, born January 3, 1941, passed away peacefully at home on December 6, 2019, after a courageous battle with lung cancer. The family and friends will join in a celebration of his life at a later date. He is pre-deceased... View Obituary & Service Information

The family of Derek Hudspith created this Life Tributes page to make it easy to share your memories.