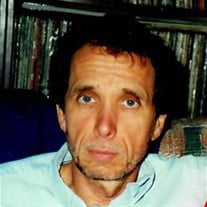 The memorial service for Donald David Fort, 68, of Columbia will be held at Christian Life Church, Brown Chapel, 2700 Bush River Road, Columbia, SC 29210, on Saturday, July 27, 2019, at 11:00 am. The family will receive friends from 10:00 am until the hour of the service at the church. The Reverend Glenn Burchett will officiate. Donald D. Fort son of Dr. James A. Fort and Mary Owen Fort was born on September 4, 1950. He went to his eternal rest on July 17, 2019. Donald also known as Don was a graduate of the Old Columbia High School class of 1969 in Columbia, SC. Don played drums in the marching band for four years. He also participated in the 1967 Rose Bowl Parade in Pasadena, CA with the High School Marching Band. He played drums in various church's throughout Columbia, SC. Don was the owner and operator of Fort Tree Services for 50 years. He was always at his happiest when working. He really enjoyed the work he did. Don met and became good friends with Christina M. Fort. While dating they became devoted Christians together and later wed on July 1, 1984. This union they were blessed with one son James Nicholas Fort. Don and Chris were longtime members of Christian Life Church. Don loved his family very much and worked hard to provide for them. He would do anything for his family. Anyone who knew Don knows he had a rough exterior at times, but under that exterior was the kindest most gentle person you would ever want to meet with a heart of gold. He would drop whatever he was doing to help anyone who needed him. He would give money, food, provide transportation and give assistance in any way he could to whoever needed help. That is the type of generous person Don was. He had such a big heart when it came to animals. He just loved them and was always taking in an animal that did not have a home. His kindness and generosity go on and on. Don's survivors include his loving wife of 35 years Christina M. Fort, their son James N. Fort (Nick) both of Columbia, SC, two brothers Thomas M. Fort of Columbia, SC and his wife Ina and William O. Fort of Lexington, SC and his wife Kay. Three grand-children Alana Fort, Mary Fort, and Brantley McCartha also a number of nieces and nephews and friends. Those preceded him in death his late parents Dr. James A. Fort and Mary O. Fort and his brother James A. Fort III. Memorials in Don’s honor may be directed to Christian Life Church, 2700 Bush River Road, Columbia, SC 29210.

The family of Donald D. Fort created this Life Tributes page to make it easy to share your memories.

The memorial service for Donald David Fort, 68, of Columbia will...