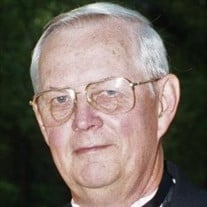 COLUMBIA—Donley Dean Freshwater, 87, of Columbia, South Carolina died Friday, July 10, 2020. Born in Ottumwa, IA, March 22, 1933, he was the son of Mary (Mather) Freshwater and Harvey L. Freshwater. He is survived by his loving wife of 53 years, Theresa (Macuk), of Columbia; son, Eric, and granddaughter, Sydney of Seneca, SC, and son, Christopher, daughter-in-law Joey (Goddard); grandchildren, Caroline, Claudia and Alexander of Tucker, GA. Donley was preceded in death by his son, Gregory, brothers, Earl and John, and sister, Betty Boesen, and her husband, Robert. He served as Sergeant in the United States Marine Corps and Marine Corps Reserve from 1952-1960, including serving as a US Embassy guard in Afghanistan. Donley received a BS degree in Mechanical Engineering from the University of Idaho in 1960. He worked for Allis-Chalmers in West Allis, Wisconsin where he met the love of his life, Theresa. The two were married in Milwaukee on September 24, 1966, and started their family there. In 1969, Donley’s job transferred to Appleton, Wisconsin, where their youngest son was born. The family then moved to Columbia in 1974, where he was employed by Hewitt Robins with various titles including Chief Engineer and Manufacturing Manager until his retirement in 1998. Don was happy to share that he was a proud father and grandfather. He enjoyed international travel during his work career and Marine Corps service. Don enjoyed golf, bowling, tennis, bridge, and became an avid gardener in retirement. Donley’s family and friends are invited to celebrate his life at a Memorial Mass at Our Lady of the Hills Catholic Church, 120 Marydale Lane, Columbia, SC 29210 at 11:00 a.m., Saturday, August 1. The service will be preceded by a Rosary at 10:00 a.m. and Visitation at 10:20 a.m. Graveside service will immediately follow at Bush River Memorial Gardens, 5400 Bush River Road Columbia, SC 29212. In lieu of flowers, donations can be made to Our Lady of the Hills building fund.

COLUMBIA&#8212;Donley Dean Freshwater, 87, of Columbia, South Carolina died Friday, July 10, 2020. Born in Ottumwa, IA, March 22, 1933, he was the son of Mary (Mather) Freshwater and Harvey L. Freshwater. He is survived by his loving wife of... View Obituary & Service Information

The family of Donley Dean Freshwater created this Life Tributes page to make it easy to share your memories.