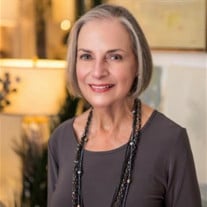 Donna Anne Graham Rone July 26, 1945 – January 18, 2020 A memorial service to celebrate the life of Donna Anne Graham Rone, 74, of West Columbia, will be held on Sunday, January 26, 2020, at 3:00 p.m. at St. Mary’s Episcopal Church, 170 St. Andrews Road, Columbia 29210. The Reverend Jill Beimdiek will officiate. Visitation with the family will follow the service in the Parish Hall. Donna was born in Florence, SC, on July 26, 1945. She was the daughter of John LeRoy Graham and Mabel Mims Graham. She was a 1963 graduate of McClenaghan High School in Florence, SC, received her B.A. from Furman University in 1967 and her M.Ed. from University of South Carolina in 1975. She held leadership positions throughout her student career at Furman, was a member of Senior Order and received the Algernon Sydney Sullivan and Mary Mildred Sullivan Award in recognition of "noble humanitarian qualities of character". Upon graduation, Donna was in training as a Trust Officer at Wachovia Bank in Winston-Salem when she received a call from the Provost to return to her alma mater and help open the Admissions Office at Furman, working as a counselor and “road runner” until she left to attend graduate school at USC. She was Director of the Voluntary Action Center of United Way in Columbia until she was appointed Admissions Officer of USC-Sumter. She returned to Columbia in the 1980s when she was appointed Director of Health Education at Lexington Medical Center. After marrying Curt, she always listed her occupation as “Manager of the Rone Zoo”. She loved being a Mom and a Nonna. Donna was very involved in the community and was the common thread, connecting many otherwise unrelated groups of friends. She was passionate about her involvement and served in many leadership positions, such as president of Symphony League, chair of SL Endowment, board of SC Philharmonic, recipient of Maj. Gen. Robert B. Solomon Award, president of Friends of USC School of Music, Palmetto Health Cancer Centers board and co-chair of Atrium Society. She was inducted as a Palmetto Health Foundation Fellow in 2013. She was a member of Gay Gardeners, SIBF BOSS, Palmetto Club, Carolinian Society, Columbia Sailing Club, Bill Tuller Chapter of American Wine Society and Furman Alumni Association (she never stopped recruiting for Furman). Donna’s “Birthday Group” is a close circle of friends of 50 years and she loved them dearly. She also loved her medical team, Dr. Butler, Ashley, Ann, Dusty and Betty and all the individuals who passed through South Carolina Oncology Associates (SCOA) over the last eight years; she truly never met a stranger and touched the lives of so many. Donna grew up in First Baptist Church in Florence and was a longtime member of St. Mary’s Episcopal Church in Columbia, having served as Lay Eucharistic Minister and as a member of the Vestry. Donna is survived by her husband of 32 years, Charles C. “Curt” Rone, Jr., daughters, Jeni Becker (Abe), Lizabee Ciesar (Chuck) and son, Nick Rone (Amanda). She is also survived by her sisters, Linda Brockman (Ben), Betsy Wright (Tom) and brother, Edward Graham (Emily). She was preceded in death by her parents. She has five grandchildren, Roxie, Jack, Taylor, Luke, and Lily, and she loved Ana Maria and her daughter, Sarah, as her own children. In lieu of flowers, the family asks that memorials be made to Palmetto Health Foundation – Atrium Society, SCOA Cares Foundation, or a charity of your choice.

The family of Donna Anne Graham Rone created this Life Tributes page to make it easy to share your memories.