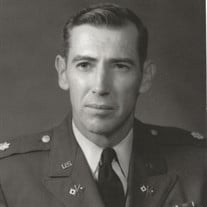 Lt. Colonel Donzelle Davis, U. S. Army, 92, and a native of Samson, Alabama, passed away on March 6, 2021. Born in 1928, he was the son of the late James and Rosa Davis. He graduated from Kinston High School in Alabama and attended the University of Maryland earning a Bachelor's and a Master's degree in Government and Politics while on active duty with the U. S. Army. He also received training at the U. S. Army Signal Corps Pictorial Center in New York at the beginning of his military career. After retirement, he completed additional graduate work at the University of South Carolina obtaining a teaching certificate in Social Studies. He was commissioned a 2nd Lt. after graduating from the Signal Corps Officer Candidate School, Fort Monmouth, New Jersey. He served overseas tours in the Philippines, Germany, and Hawaii, and served during hostilities in Korea and Vietnam. As a career regular Army officer, Col. Davis felt fortunate to have his wife and family accompany him on tours in Germany and Hawaii. Stateside tours were numerous, including assignments to New York City, the Pentagon, Washington, DC, the Infantry School, Fort Benning, Georgia, Fort Jackson, South Carolina, Fort Polk, Louisiana, and Fort Meade, Maryland. He participated in “Exercise Portrex,” a joint military amphibious exercise in the Caribbean Sea, and "Exercise Snowstorm" in upstate New York with the 82nd Airborne Division. He received numerous military awards and decorations including the Bronze Star Medal. After retiring, he was actively involved in family, civic, and community affairs and served for six years on the Board of Trustees of the Lexington Medical Center in Columbia, SC. He will be remembered for his love of his family and his military career. He loved photography, creating many beautiful photographs for family albums. He loved spending time with his family and loved the outdoors, fishing, hunting, history, science, current events, reading, basketball, and tennis. He was strong, humble, patient, had a great sense of humor, and was compassionate toward others. He will be dearly missed by his family and friends. Col. Davis is survived by his loving wife of almost 70 years, Marina Fay, two daughters, three grandchildren, and three great grandchildren, and was preceded in death by all of his eleven siblings. Col. Davis was laid to rest in a private family graveside service at Union United Methodist Church Cemetery on March 11, 2021, with full military honors. The family extends their appreciation to Temples-Halloran Funeral Home, and Union United Methodist Church of which Col. Davis was a member. Memorial gifts may be made to Union United Methodist Church “Cemetery Fund,” 7582 Woodrow Street, Irmo, SC 29063. Please specify: “Cemetery Fund Memorial Gift for Donzelle Davis."

Lt. Colonel Donzelle Davis, U. S. Army, 92, and a native of Samson, Alabama, passed away on March 6, 2021. Born in 1928, he was the son of the late James and Rosa Davis. He graduated from Kinston High School in Alabama and attended the... View Obituary & Service Information

The family of Lt Colonel Donzelle Davis created this Life Tributes page to make it easy to share your memories.