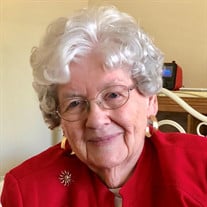 On the evening of March 20, 2021, Elise Warren of Columbia, South Carolina, died at the age of 90. Born in Hampton County South Carolina, Elise was the daughter of Manker and Vivian Gibson. Elise graduated high school in Walterboro, SC where she enjoyed going to the movies with her older brother who was the projectionist (we suspect she got in for free). After high school, Elise worked at Navitz Shoe Store in Walterboro before attending Draughton’s Business College in Columbia. After business school, Elise returned to Walterboro and worked at the Press and Standard newspaper. She met Tom Warren at a dance at the VFW where Tom, always the scrapper, took down an offensive and much larger opponent. Elise’s girlfriends rushed to her side saying that she should marry Tom... she would always be protected. The couple married in 1952 and moved to Columbia. Elise was hired at Richland County School District One in 1952. She was promoted through various administrative jobs and became the head of payroll and insurance overseeing operations in those departments. She retired in 1988. Elise loved to cook, bake, sew, knit, quilt, draw, and sing. She loved hosting large gatherings of coworkers or family at the lake house for a fish fry, hushpuppies, and grits. She also loved doggies and kitties and had some of either, or both, her entire life. She was a long-time member of St. Andrews Baptist Church. Surviving is her son, Thomas Warren Jr., and wife, Linda Warren of San Ramon, CA, one granddaughter, one great-granddaughter, one great-grandson, along with many nephews, and nieces, all of which know her as Aunt Fleecy, and one of which was also born on Elise’s birthday. She was preceded in death by her husband of 64 years, Tom Warren, and by her older brother, Wendall Gibson of Barnwell, SC. A Celebration of Life Service will be announced later in the year. Memorials may be made to St. Andrews Baptist Church, 230 Bush River Road, Columbia, SC 29210 or Alzheimer’s Association, alz.org.

On the evening of March 20, 2021, Elise Warren of Columbia, South Carolina, died at the age of 90. Born in Hampton County South Carolina, Elise was the daughter of Manker and Vivian Gibson. Elise graduated high school in Walterboro, SC where... View Obituary & Service Information

The family of Elise Warren created this Life Tributes page to make it easy to share your memories.