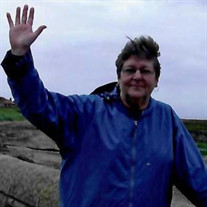 COLUMBIA—A love for education---whether in the classroom, pointing out the history of castles for fellow tourists in Scotland or a fast-moving board game with the “Crazy Eights” --- defined Liz Bradstreet. Elizabeth Earney Bradstreet, 71, passed away after a long illness on July 15, 2020, leaving a legacy to cherish for husband Les, friends ranging from those close to her Columbia, home to the Peplinski family in Scotland, and her former colleagues on the staff at Lower Richland High School. The daughter of the late Col. William Earney (USMC) and Geraldine Earney, she had a special place in history. She was the last baby born in the hospital at Parris Island Recruit Depot before maternity facilities moved to nearby Beaufort Naval Hospital. Her father’s military career took her to multiple Marine bases, ranging from Camp Pendleton in California to Parris Island in South Carolina. She attended Catholic schools at each stop and earned her bachelor’s degree in education from the University of South Carolina. Liz picked up a love for golf from her Mother, a Navy nurse. She had the opportunity to play on such course at Torrey Pines, the site of the Annual PGA Tour Tournament, and the 2008 U.S. Open. That worked perfectly with her husband, Les, who is an avid golfer. This provided a springboard for their annual trip to Scotland each July during Open Championships. Their journeys included “the tourist things” because Liz was aware of the history of the country, as well as the site. She cheerfully shared this rich history with fellow tourists. The trips always included golf. There were treasured pictures taken of which one was Liz, posing with Tom Watsons, Five Open Championship Trophies. While another featured Liz and Les on the famed Swilcan Bridge on the Old Course at St. Andrews. The Bradstreet’s became “regulars” in Scotland with the trips 2006-2018. They added friendships each year and forged a special relationship with the Peplinski family. The 2018 journey to Carnoustie included a special treat --- a meeting with David Wishart, her favorite author who writes mystery stories set in ancient times. The Bradstreet’s spent the day with Wishart and established a bond so strong that the author sent the manuscript of his latest novel for Liz to edit. She would be perfect for editing, in that he spent 28 years teaching English at Lower Richland, starting after graduation from USC in 1974 until her retirement in 2002. The “Crazy Eights” included eight teaching friends with common interests and the group’s word game call Botticelli are fond family memories. A Memorial service will be planned for a later date. Memorials can be made to the Columbia Humane Society, 121 Humane Lane, Columbia, SC 29209.

COLUMBIA&#8212;A love for education---whether in the classroom, pointing out the history of castles for fellow tourists in Scotland or a fast-moving board game with the &#8220;Crazy Eights&#8221; --- defined Liz Bradstreet. Elizabeth Earney... View Obituary & Service Information

The family of Elizabeth E. Bradstreet created this Life Tributes page to make it easy to share your memories.