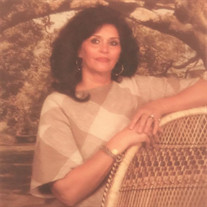 COLUMBIA - Funeral services for Evelyn June Hughes Shealy Derrick, of Columbia, will be held at North Trenholm Baptist Church, 6512 North Trenholm Road, Columbia, South Carolina 29206 on Monday, March 9, 2020, at 2:00 p.m. Burial will follow the service at Crescent Hill Memorial Gardens, 2603 Two Notch Road, Columbia, SC 29204. Visitation and the Order of the Eastern Star funeral rites will be held at the Temples Halloran Chapel, 5400 Bush River Road, Columbia, South Carolina 29212 on Sunday, March 8, 2020, between the hours of 4:00 to 6:00 p.m. Evelyn was born in Loudon, Tennessee, on June 11, 1936, to the late Carrie White Hughes and the late William Clay Hughes. She passed away Wednesday, March 4, 2020. Evelyn June Hughes and Bill Carroll Shealy were married in Columbia on September 1, 1951. They were baptized as a young married couple at Dentsville Baptist Church in Columbia. They raised their children, Edward, Judy, and Dianne, in the Dentsville community and Evelyn made certain that the children attended church and participated in church activities. Judy and Dianne have special memories of walking to church with their mother and neighborhood friends for Vacation Bible School during the summer evenings. Evelyn later joined North Trenholm Baptist Church where she especially enjoyed worshiping with her Sunday School class. Attending church was a very important part of Evelyn’s life. Evelyn became a member of the Order of the Eastern Star as a young woman in her thirties and had just recently received her pin and certificate for fifty years of dedication to the Order of the Eastern Star. She is a Past Worthy Matron and sat in every chair of the Star Points. Evelyn’s most precious and revered Star Point was the white Star Point of Queen Esther. Evelyn so admired the strength and courage Queen Esther possessed that she read any material available and became very knowledgeable of Queen Esther’s story. In June 1993, Evelyn married James E. “Jack” Derrick, Sr. Jack was a long-standing member of the Masons and had for many years been involved with the Order of the Eastern Star. Evelyn and Jack enjoyed sharing Eastern Star events and loved traveling to various meetings together and participating in activities. Anyone who knew Evelyn well would likely recall the large, colorful, and unusual jewelry she would wear. She had an interest in making her own jewelry. That interest led to her attending school in Atlanta several years ago to learn to create her own jewelry. She also loved going to the flea markets, especially the regular trips she and Bill would make to the Charlotte Metrolina Expo Flea Market. There she would enjoy looking at all the unusual jewelry and vintage clothing. These were very happy days of Evelyn’s life. Judy and Dianne will always carry the memory of their mother as a tall and beautiful dark-haired lady who loved to shop and dress up in colorful, beautiful clothes, hats, handbags, and shoes. Judy and Dianne’s most special memories with their mother will be the many sleepovers they had together when they would all pile in the same bed and laugh themselves silly about ridiculous things until they fell asleep. The grandchildren will always carry special memories with them about Mawmaw’s butterscotch candy-filled handbag, her super sweet iced tea, and her very big early model Cadillac cars. Judy recently gave her mother a wall hanging that said, “I love that you are my mother,” and Dianne gave her mother one that said, “a child could never love her mother more.” Truer words for both could not have been written. Evelyn is survived by her daughters: Judy Carroll Shealy Kucewesky of Troutman, North Carolina, and Dianne Shealy Chapman Armistead of Columbia, South Carolina. She is also survived by granddaughters: Amanda Hughes Kucewesky Huntsinger, Lindsay Dianne Chapman Parrish, and Jennifer Tara Kucewesky Stoner; and grandsons, Daniel Billy Chapman, Justin Riley Kucewesky, Ashton Blake Chapman, and Cameron Blair Armistead. She is also survived by twelve great-grandchildren: Jonathan, Bryson, Alex, Alyssa, Brayden, Ethan, Ben, Gemma, Ellie, Sam, Doc, and Amelia. She is also survived by three sisters: Loretta, Jean, and Becky. During her final days in hospice care, Judy and Dianne spent every day and every night with their mother looking after her to assure her she was not alone and talking to her, keeping her hair combed, reading Bible verses to her, praying with her and kissing her good night each night until she peacefully slipped away during the early morning of March 4. Evelyn was predeceased by her first husband and the father of her children, Bill Carroll Shealy; her second husband, James Edward Derrick, Sr.; her son, Edward Eugene Shealy; and her infant daughter, Mary Anne Shealy. She will be laid to rest beside her first husband and the father of her children. Memorials may be made to The Shriner's Hospital, 950 W. Faris Road, Greenville, SC 29605 and North Trenholm Baptist Church, 6512 North Trenholm Road, Columbia, SC 29206.

The family of Evelyn June Hughes Shealy Derrick created this Life Tributes page to make it easy to share your memories.