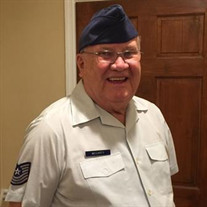 Columbia—Franklin Delano McCarty, 85, of Columbia, affectionately known as “Mac” and “Dick” to his family and friends, passed away peacefully at Agape Hospice House on June 9, 2019. Funeral Services will be held at Riverland Hills Baptist Church, 201 Lake Murray Blvd., Irmo, SC 29063 on Tuesday, June 11, 2019, at 11:00 a.m. Interment will follow at Bush River Memorial Gardens, 5400 Bush River Road, Columbia, SC 29212. The family will receive friends at the church prior to the service, beginning at 9:30 a.m. Born in Ridge Spring, SC on February 6, 1934, Mac was the son of the late Simeon and Blanche Padgett McCarty. A graduate of Ridge Spring High School, he attended Newberry College and Proudly served in the US Air Force and later in the Air National Guard. Mac was employed by the SC Department of Public Safety, retiring as the Director of Motor Vehicles. Mac was an active member of Riverland Hills Baptist Church for 48 years, most recently volunteering in the church welcome center where he took joy in greeting visitors, members, and the little ones in the day school. An avid USC fan, spring afternoons and evenings were reserved for Gamecock baseball where Mac and his buddies could be found in their favorite seats, cheering on their team. His greatest joy, however, was spending time with his children, grandchildren, and his large extended family. Mac never met a stranger! Survivors include his loving wife of 60 years, Betty Tucker McCarty; daughter, Sheila Kea (Eddie); son, Mitchell McCarty; grandchildren, Kelly Kea Hall (Patrick), Katherine Kea Corey (Joe), Lexi McCarty; sisters, Frances Crouch, Marion Rister, and Van Rae Bledsoe. In addition to his parents, Mac is predeceased by a sister, Julia Boozer; brothers, Bruce McCarty, Thomas Lee McCarty, Tyrone McCarty, Major McCarty, and Sim “Yank” McCarty. Memorials may be made to Riverland Hills Baptist Church. The family would like to extend their gratitude and appreciation to the staff of Agape Hospice House for their care and concern. A special thank you to his in-home caregiver, Carolyn, for loving him like her own family.

The family of Franklin "Mac" Delano McCarty created this Life Tributes page to make it easy to share your memories.