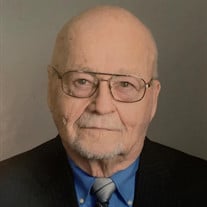 Glenn “Ray” Olsen entered into eternal life on August 27, 2021. He passed away peacefully at home suddenly. It was fitting that, at the time of his passing, he was enjoying one of his simple pleasures of watching TV and eating a bowl of his favorite ice cream. Ray was born on September 13, 1935, in Norway, Michigan, and was the son of Olive Irene and George Reynold Olsen. He graduated from Clintonville High School in Clintonville, Wisconsin, and subsequently married the love of his life, Elizabeth (Betty) Jane Klade on December 18, 1954. They were blessed to have four children and many grand and great-grandchildren. Ray enlisted in the United States Navy which led to a very distinguished career. Rising through the enlisted ranks to 1st Class Petty Officer, Ray applied for and was one of 200 applicants selected out of 20,000 applicants into the US Navy’s inaugural class of the Navy Enlisted Scientific Education Program (NESEP). He was then enrolled at the University of Mississippi in Oxford, MS, where he earned a Bachelor of Science in Math and a minor in German. Upon graduation, he received a commission to the officer rank of Ensign and his career blossomed allowing him to travel the world on many ships and shore duty assignments. He was a veteran of the Vietnam War and eventually retired in 1982 at the rank of Lieutenant Commander. He and Betty moved to Columbia, South Carolina in 1982 to be near family. He enrolled at the University of South Carolina and earned his certification as a teacher while teaching Navy Jr. ROTC and then math from which he eventually retired again. He was very active as a member of Redeemer Lutheran Church where he served on the Finance Committee, Pre-school Board, and a bass singer in the church choir. He was an Eagle Scout, Scout Master, and a poll manager in his voting district's election site. Ray also served the USC School of Medicine as part of their patient-care simulation program where he was a patient actor preparing medical students for real-world healthcare scenarios. Ray loved his family dearly starting with Betty and their children Diane, David, Suzanne, and Richard. He most enjoyed holidays and family gatherings which grew to include two sons-in-law, two daughters-in-law, eleven grandchildren, four step-grandchildren, and 13 great-grandchildren. He loved playing with the grand and great-grandchildren always bringing laughter and creating memories for all. One only had to be in Ray’s presence for a very short time to realize he took a personal interest in truly getting to know others as he cultivated a wide network of friends. He loved telling stories of the past, many of which are part of the family folklore as he shared them many times- always in great detail and with the intent of humor or teaching life lessons. All of his life, he had an innate passion for motorcycles, which he owned and rode with much joy. Ray was predeceased by his parents, Olive and George Olsen, his sister Shirley “Nonie” Knapp as well as his beloved son-in-law Carlos Brown. Surviving are his wife of 68 years, Betty, and children Diane Olsen Brown, David Ray Olsen (Mary Jo), Suzanne Marie Harmon (Bill), Richard William Olsen (Joanne). Also, the twinkle in his eyes, his grandchildren, Kristina Callaway (Curtis), Lauren Armstrong (Alex), Megan Olsen-Wood (Tim), Jaclyn Bell (Jon), Sharon Jessee (Ben), Andrew Olsen (Charity), Robert Olsen (Cathy), Steven Harmon (Sally), Brandon Olsen, Carlos Brown (Stacy), Gregory Harmon (Carina) as well as 4 step-grandchildren Beth, Katie, Jake, and Sarah Knapp. He was further blessed with great-grandchildren who kept him young at heart- Jackson and Grant Callaway, Olivia and Jude Armstrong, Cadence Olsen, Zinnia Olsen-Wood, Evie, Norah, and Gwen Jessee, Kaitlyn and Chloe Bell, Vance and Ellie Harmon. Ray led a blessed life. He worked hard to provide for his family, gave of himself for others, and set an example to all of how to live to the fullest with kindness, care, and his faith. He will be missed but those who knew him to draw comfort in knowing that Ray accepted Jesus Christ as his Lord and Savior. We know he is in the presence of our Lord and no doubt joining the choir of heaven, harmonizing with his beautiful bass voice. We know Ray’s hope for you is to not be sad on this day but rather celebrate his eternal life. His wish was and is that you will join him through your own salvation by accepting Christ as your savior. Just as God’s word promises in John 14:1-3 “Do not let your hearts be troubled. You believe in God; believe also in me. My Father’s house has many rooms; if that were not so, would I have told you that I am going there to prepare a place for you? And if I go and prepare a place for you, I will come back and take you to be with me that you also may be where I am.” A memorial service for Glenn “Ray” Olsen will be held at 2:00 pm Saturday, September 4, 2021, at Redeemer Lutheran Church, 525 St. Andrews Road, Columbia, SC 29210 with the Reverend Gary Loadholdt, officiating. The family will receive friends from 1-2 pm prior to the service at the church. The inurnment of Glenn will be held at 10:00 am, Tuesday, September 7, 2021, in Ft. Jackson National Cemetery.

Glenn &#8220;Ray&#8221; Olsen entered into eternal life on August 27, 2021. He passed away peacefully at home suddenly. It was fitting that, at the time of his passing, he was enjoying one of his simple pleasures of watching TV and eating... View Obituary & Service Information

The family of Glenn Ray Olsen created this Life Tributes page to make it easy to share your memories.