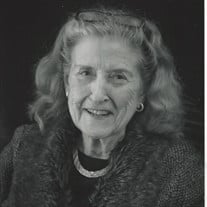 Grace Williams Proctor, 92, formerly of Columbia, widow of Gerald Edwin Proctor, died Wednesday, February 14, 2018 in Spartanburg. Born on November 25, 1925, in Norway, SC, she was the daughter of the late Aubrey Grady Williams, Sr. and the late Pauline Tidwell Williams. Mrs. Proctor grew up in Norway, Winnsboro and Ridgeway, SC. She graduated from Ridgeway High School in 1942, and Winthrop College, Rock Hill, SC Class of 1946. She was employed in Greenville at J.P. Stevens Co., where she met her husband, who was from Mentor, Ohio. He was recalled to the Air Force to reopen Donaldson Air Force Base during the Korean Conflict. She shared her husband’s Air Force Career, living in Virginia, Alabama, England and Germany until his retirement in 1975 in Washington, DC. They moved to Columbia, SC and lived in Murraywood. She was an active member of the Military Officer’s Wives Club, the Springfield Golf and Country Club, The Presbyterian Church and for many years served on the Fairfax County, VA School Board. She was an officer in the Parent Teacher’s Association and chairman of the School Room Mothers, where her children attended school. Grace was an enthusiastic supporter of all her family members and their endeavors. In retirement, Mrs. Proctor enjoyed bridge with friends at the Irmo-Chapin Recreation Center. She was a member of the low-impact aerobics class at the center for over 20 years. Grace was a member of The Forestry Association of South Carolina. For the last 2 years, she resided at Eden Terrace where she helped create a Tuesday Bridge Club and enjoyed relationships with residents and staff. Surviving are two children and their spouses in order of their births, Gerald “Jed” Edwin Proctor, Jr. and his wife, Trudy Walker Proctor of Spartanburg; Jayne Anne Proctor Miller and her husband, Richard Stewart Miller of Spartanburg; six grandchildren who gave her so much happiness, Elizabeth “Libby” Proctor Fillmore (Gary), Christine Proctor Gunter (John), Kellynn Proctor West (Patrick), Robert “Bob” Franklin Day III, Kathryn “Katy” Grace Miller, Richard Stewart “Stewart” Miller, Jr. and one great-grandson, Austin Connor Fillmore. She was preceded in death by her oldest daughter, Jean Elizabeth Proctor Day; her beloved husband, sister, Elizabeth Williams Curlee of Greenville and a brother, Aubrey Grady Williams, Jr. of Winnsboro. Funeral services for Grace will be held at 12 noon Saturday, February 17, 2018 at the Chapel of Temples Halloran Funeral Home, 5400 Bush River Road, Columbia, SC 29212. Pastor Richard W. Smith will officiate. Entombment will follow in Bush River Memorial Gardens Mausoleum. The family will greet friends from 11:30 a.m.- 12 noon prior to the service at the funeral home. Memorials may be made to Eden Terrace of Spartanburg, 2780 East Main Street, Spartanburg, SC 29307 or Hope Point Church, 190 Lincoln School Road, Spartanburg, SC 29301.

The family of Grace Williams Proctor created this Life Tributes page to make it easy to share your memories.