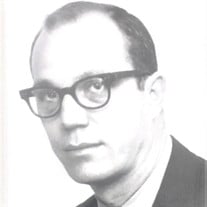 Harold Andrew McGuffin, 93, of Columbia, SC, passed away November 17, 2020, surrounded by loved ones. He was known to many as "Gramps", the name he chose when he became a grandfather. Harold Andrew McGuffin was born November 5, 1927, in Spartanburg, SC, where he grew up, graduating as valedictorian of his class from Boiling Springs High School. He was a graduate of Wofford College, majoring in Economics, and later received a Masters of Public Administration from Syracuse University. He served in the United States Army from 1950-1952 as part of the Germany Occupation Force. Harold married Bonnie Jean Moore on May 16, 1953. Throughout their 63 years of marriage, their love for the Lord, each other, and their four boys was evident to all who knew them. Nothing made Gramps happier than being with his family and fishing with his boys and grandchildren. His only regret in leaving this life was not getting to catch one more fish! Harold spent his career with the Internal Revenue Service. He retired in 1983 as the Southeast Regional Commissioner. In 1981 he was a recipient of the Presidential Rank Awards for the Senior Executive Service for his distinguished service as a federal civil servant. Harold leaves behind four sons, their wives, ten grandchildren, five great-grandchildren, and another great-grandchild due in April. Sons and their wives: Stan (Linda) McGuffin, Ken (Jan) McGuffin, David (Anne) McGuffin, Glenn (Susie) McGuffin; 10 grandchildren and their spouses: Welles (Jeremy) Bricker, Brad McGuffin, Drew McGuffin, Kristen (Russell) Matherly, Kate McGuffin, Elizabeth (Joseph) Simmons, Conor McGuffin, Kelly (Augustine) Emmanuel, Caitlin (Jake) Ohman, and Paul McGuffin; five great-grandchildren: Maggie Rae Bricker, Wyatt Bricker, River Peterson, Jack Simmons, and Eleanor Simmons. Funeral services for Harold will be held at 1:00 p.m. Sunday, November 29, 2020, at the First Baptist Church of Irmo, 7068 Nursery Rd, Columbia, SC with burial in Bush River Memorial Gardens, 5400 Bush River Rd, Columbia, SC. The Reverend Clark McCrary will officiate. In lieu of flowers memorials may be made to First Baptist Church of Irmo and National Leukemia Society, 107 Westpark Blvd., Ste. 150, Columbia, SC 29210. The family is being assisted by Temples Halloran Funeral Home.

The family of Harold Andrew McGuffin created this Life Tributes page to make it easy to share your memories.