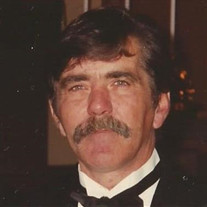 The funeral service for James “Jim” I. Bernecky, 70, of Columbia, will be held at 10:00 a.m., Friday, November 24, 2017 at the Ft. Jackson National Cemetery, with the Reverend Larry Haggerty officiating. Attendees must line up in their cars at the cemetery no later than 9:45 a.m. Jim passed away on Tuesday, November 14, 2017. Born in Johnstown, Pennsylvania on July 16, 1947, he is the son of the late Simon and Gladys Bernecky. To those close to him, Jim was simply known as Pawpaw. Pawpaw enjoyed rooting for his Pittsburgh Steelers, working in the garden, coin collecting, spending time with his grand and great-grandchildren, and proudly served in the U.S. Army. He made friends with everyone he met and always knew how to bring a smile to your face. Jim is survived by his sisters, Jenny and Judy; brother, Ron; son, Tony Bernecky (Dana) of Chapin; daughters, Christine Bernecky of Columbia and Angie Evett of Sebring, Fl.; grandchildren, Justin Solich (Whitney), Kaela Bernecky, Kyle Bernecky, Joshua Evett, Dylan Evett, and Amanda Evett; great-grandchildren, Xander Solich, Jayden Evett, and Jaylyn Evett. Jim was preceded in death by his parents, brother, Bill Bernecky, and nephew, Billy Bernecky. In lieu of flowers, family asks that you please donate to Palmetto Health Foundation. Please designate the donation to hospice. Visit https://events.foundation.palmettohealth.org/sslpage.aspx?pid=207 for donations.

The family of James "Jim" I. Bernecky created this Life Tributes page to make it easy to share your memories.