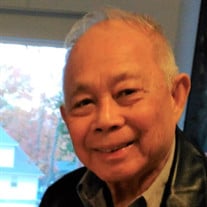 IRMO-Juan died peacefully the early morning of Tuesday, May 21th, 2019 at Lexington Medical Center. He was blessed in the prior days to be surrounded by his children, their spouses, grandchildren, and friends. Juan was born in Dumalag, Capiz, Philippines on August 24, 1934. Son of Eufracio Fagtanac and Dolores Advincula, youngest of 5 siblings. Juan graduated in 1962 from Far Eastern University, Manila with a Doctorate in Medicine. In 1963, both Juan and his wife, Emerita, took advantage of the opportunity to come to the United States through the professional exchange visitor VISA program, where he started his residency at a Chicago Hospital. While still in Chicago, he married Emerita Castro, where shortly after, in 1965 they had their first daughter, Jeanette. In 1969, Juan and Emerita returned to the Philippines where their second daughter, Lovelle, was born in 1970, Iloilo city. In 1972, they then returned to the US and shortly after, their son, Steven, was born, in West Virginia. Two months after having Steven, they moved to Charleston, South Carolina, where Juan then completed his residency and passed the SC medical boards. A couple of years later, Juan and Emerita settled in Columbia, South Carolina, at which they have since resided. Juan was an astute and caring physician. For over 30 years, he worked for the South Carolina State Department of Mental Health as a General Physician, primarily working at C.M. Tucker nursing home and the Crafts-Farrow campus. He was a respected physician to his peers and patients and often played the piano for the nursing home residents and staff. Juan enjoyed many hobbies outside of his professional career, and was undoubtedly a proficient self-taught musician and could play the piano by ear. He loved jazz standards and learned 100+ songs throughout his life, while also learning other instruments like the guitar, organ, and bongos. Juan loved the outdoors and was an avid fisherman, gardener, and competitive shooter. He loved to boat and fish at the river, and spend many hours at Lake Murray. He also loved to play tennis, billiards, chess, mahjong and would competitively shoot pistols with clubs, where he won awards many times. In his later years, he took up bowling and casino gambling, and took numerous trips to Atlantic City casinos with Emerita, entering into many slots and poker tournaments. In 2005, Emerita was diagnosed with Alzheimer’s and Juan spent the next 10 years taking care of her until her passing in 2015. He was a loving and devoted husband, never leaving her side, and took care of her at home till the end with the help of family, caregivers, and hospice care. Juan is survived by three children, Jeanette, Lovelle, and Steven and six grandchildren, Dalton, Tyler, Jessica, Leila, Garrett, and Kataleya. Juan was a caring, loving and devoted husband, father, grandfather, friend and physician. He will truly be missed and will be loved forever. He was known to many as “Dr. Juan”, “Johnny” by his friends and “Lolo” by his grandchildren and “Yoda, Jedi Master” by his children. We will all miss his guidance, wisdom, smile, wit, and generosity. The family would like to thank Edith Alston for assisting him and taking such good care of Emerita for the last 10 years of her life. The family would also like to extend many thanks to Dr. Van Horn, his cardiologist for the last 20 years, and the wonderful staff in the MICU at Lexington Medical Center for the compassionate care in his final days. Celebrating the life for Dr. Juan A. Fagtanac, 84, of Irmo, will be held at 10:00 a.m., Thursday, May 30, 2019 at Our Lady of the Hills Catholic Church, 120 Marydale Lane, Columbia, SC 29210 burial will follow in Bush River Memorial Gardens, 5400 Bush River Road, Columbia, SC 29212. The family will receive friends from 4:00-6:00 p.m., Wednesday, May 29, 2019 at Temples Halloran Funeral Home, 5400 Bush River Road, Columbia, SC 29212.

IRMO-Juan died peacefully the early morning of Tuesday, May 21th, 2019 at Lexington Medical Center. He was blessed in the prior days to be surrounded by his children, their spouses, grandchildren, and friends. Juan was born in Dumalag, Capiz,... View Obituary & Service Information

The family of Juan Advincula Fagtanac, MD created this Life Tributes page to make it easy to share your memories.

IRMO-Juan died peacefully the early morning of Tuesday, May 21th,...