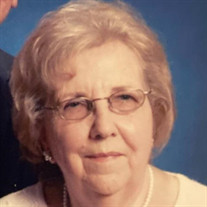 Kathleen "Kate" Barrett, 86, of Columbia, widow of William George Barrett, passed away at her home on Saturday, July 31, 2021. Kate was born May 31, 1935, in Linville, NC, the daughter of Stella Edna McGuire and Rosler C. Gouge. She weighed 3.5 pounds and was not expected to survive. A descendant of several Methodist ministers, she was baptized at Linville United Methodist Church. She graduated from Happy Valley High School in Elizabethton, TN, in 1953. After high school, she moved to Pensacola, FL, where she worked at the San Carlos Hotel and then at Pensacola City Hall. She met Bill Barrett in 1957, and they were married on April 11, 1959, at the First Methodist Church of Pensacola. Kate and Bill lived in Sheboygan, Wisconsin, for a few months before returning to Pensacola, where she resumed work at City Hall. They moved to Centerville, Ohio, in 1965 and to Columbia in 1975. They founded the Carolina Trader advertising paper, where Kate worked until retiring in 2013. Bill died in 2018. Kate enjoyed visiting with friends and family, cross-stitch, and reading. She was a member of Columbia First Church of the Nazarene and the Neely Friendship Sunday School class. She was the last survivor of the 48 grandchildren of Cordelia Phebe Burleson and Joseph Leonard Gouge, and the oldest surviving grandchild of Laura Adelaide Rominger and the Rev. John Thomas McGuire. She is survived by two sons, Patrick William Richard (John Miller) of Columbia and Michael Raymond (Jamie) of Irmo; three grandsons, Neil Anthony (Hallie) of Indian Springs, AL, Nicholas Adam (Christa) of Chicago, and Nathan Andrew of Irmo; two great-grandsons, Jack and Charlie of Indian Springs; additional grandchildren Camille (Mark) Rosier and Wilson (Leigh Anne) Miles; nieces and nephews Terry (Lee) Hubbard, Jennifer (Steve) Austin, Ora (Katherine) Hyder, David Hyder, Ralph (Krista) Gouge, and Joe (Shelley) Gouge, all of TN; sister-in-law, LaVerne Gouge of Elizabethton; aunt, Joan Ross McGuire of Newland, NC; cousins, Mary Ellen Hollifield, Julie Johnston, Carol Hughes, and Steve, Bart, and Vickie McGuire; and other relatives and friends. Besides her husband and parents, she was preceded in death by her sisters, Peggy Lucille Gouge and Laura Mae Hyder; brother, Zack Leonard Gouge; brother-in-law, Howard Ray Hyder; two infant brothers, Leonard B. and John William Gouge; and many other relatives and friends. The family is grateful to Sherry Johnson and to the staff of Lighthouse Hospice, especially Almeka Robinson, for the compassionate care that helped make it possible for Kate to stay in her home. The family will greet friends from 10:00 a.m.-11:00 a.m. prior to the service at the church. Services will be held at 11:00 a.m., Saturday, August 7, 2021, at Columbia First Church of the Nazarene, 901 St. Andrews Road, Columbia, SC 29210, followed by entombment in Bush River Memorial Gardens Mausoleum.

Kathleen "Kate" Barrett, 86, of Columbia, widow of William George Barrett, passed away at her home on Saturday, July 31, 2021. Kate was born May 31, 1935, in Linville, NC, the daughter of Stella Edna McGuire and Rosler C. Gouge. She weighed... View Obituary & Service Information

The family of Kathleen "Kate" G. Barrett created this Life Tributes page to make it easy to share your memories.