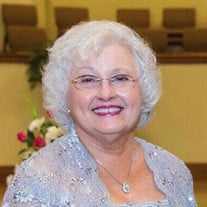 Kathryn R. Wilkes, 73, Chapin, S.C. left this life for her heavenly home on March 17, 2018 after a five-month battle with cancer. Kathie was born in Spartanburg, S.C. to parents, Samuel and Kathryn Robertson. Kathie, her husband Carl, and their family eventually settled in Chapin, S.C. for the next 45 years. Her children arise and call her blessed; her husband also, and he praises her: “ Many women do noble things, but you surpass them all. ”Proverbs 31-28-29. No truer words could be spoken of our beloved wife, mother, sister, and friend Kathryn Robertson Wilkes. Kathie amassed a legacy of unparalleled service throughout her community. Kathie enjoyed a long career as an instructional assistant in Lexington-Richland School District 5 where she was adored by scores of children and staff at Chapin Elementary and Lake Murray Elementary. Her greatest mark, however, was left on Chapin United Methodist Church where her family worshipped. She and Carl began a youth ministry with the Methodist Youth Fellowship. Kathie was also the mission coordinator for the Marjorie Derrick Circle who adopted the girls of the Stokes Cottage at Epworth Children’s Home in Columbia. Kathie and the circle planned monthly activities for the girls as well as worked tirelessly to refurbish the Stokes Cottage of Epworth. As a Stephen Minister, Kathie helped those in crisis, and she prepared monthly meals for those needing encouragement as a part of the “Spirit Lifters.” Many will best remember Kathie for her bread “ministry.” Her delicious sourdough bread was used for communion, a staple in meals for shut-ins and was a coveted gift during the holidays. Kathie was survived by her loving husband and best friend, Carl E. Wilkes; sister, Ginger Belka (Kevin) of Columbia. Three children and nine grandchildren: Dee Dee Rinehart and husband Jay of Rock Hill, S.C. and their children, Madison, Ashley, John David, and Courtney; Todd Wilkes and wife Mary Kay of North Augusta, S.C. and their children, Cameron and Sam; Mary Kathryn Liner and husband Mims of Irmo, S.C. and their children, Blake Liner (April), Taylor Guirau (Michael) and Hannah. Blake and April are also the parents of Zoéy, Kathie’s first great-grandchild. Kathie was pre-deceased by her parents, and her baby sister, Susan. Funeral arrangements are being handled by Temples-Halloran Funeral Home. Visitation will be held prior to the funeral from 10:00 a.m. to 11:30 a.m. Friday, March 23, 2018 at Chapin United Methodist Church, 415 Lexington Avenue, Chapin, S.C. 29036. The funeral service will begin at 11:30. Burial will be private. Kathie was fond of cardinals, and frequently regarded them as signs that her heavenly Father was watching over her. As a tribute, we are asking that those attending the Celebration of Life wear some RED to remind of all of Kathie's faith. The family would like to extend a heartfelt thank you to Dr. Chelsea Stillwell and the 8th floor Oncology staff at Lexington Medical Center. Additional thanks to respiratory therapist Sabra Mankin, a former member of the Wilkes MYF group, who reunited with Kathie during her illness. In lieu of flowers, friends and family are encouraged to uphold Kathie’s legacy of service and devotion with contributions to Chapin United Methodist Church, 415 Lexington Avenue, Chapin, S.C. 29036, or to Epworth Children’s Home, PO Box 50466, Columbia, S.C. 29250. Honor her for all that her hands have done, and let her works bring her praise at the city gate. Proverbs 31: 31

Kathryn R. Wilkes, 73, Chapin, S.C. left this life for her heavenly home on March 17, 2018 after a five-month battle with cancer. Kathie was born in Spartanburg, S.C. to parents, Samuel and Kathryn Robertson. Kathie, her husband Carl, and... View Obituary & Service Information

The family of Kathryn R. Wilkes created this Life Tributes page to make it easy to share your memories.