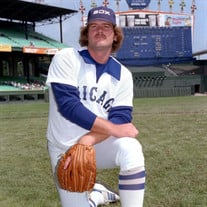 A celebration of life honoring Mr. Dewey “LaMarr” Hoyt, Jr. will be held on Thursday, December 16, 2021 in the chapel of Temples Halloran Funeral Home, 5400 Bush River Road, Columbia, S.C. 29212 at 2:00 p.m. The Reverend Dr. Mark Bredholt will officiate. The Hoyt family will receive friends from 12:30 to 2:00 p.m. in the chapel. LaMarr was born on January 1, 1955 in Columbia and departed this earthly life on November 29, 2021. He was the son of the late Dewey LaMarr Hoyt, Sr. and Norma Hoyt. LaMarr was a graduate of Keenan High School, class of 1973. After graduating he was drafted by the New York Yankees organization. Four years later, the Yankees traded him to the Chicago White Sox. Mr. Hoyt played eight seasons in major league baseball, six of which were with the Chicago White Sox. He had a solid but unspectacular rookie season in 1980. LaMarr played as a relief pitcher during the 1981 season and posted a 3.57 ERA. The White Sox moved Hoyt back to the full rotation in 1982 where he delivered an excellent season, posting a 3.53 ERA over 239 2/3 innings pitched. He maintained that level in 1983, putting up a 3.66 ERA in 260 2/3 innings. That performance, along with 24 wins, resulted in Hoyt winning the American League CY Young Award. He spent one more year in Chicago before going to the San Diego Padres. He then spent two years with the Padres, making his only All-Star Team in 1985. During the 1985 All-Star game, LaMarr was both the starting pitcher as well as the most valuable player for the National League. Mr. Hoyt was preceded in death by his daughter, Alexandra E. Hoyt. Survivors include his wife of 33 years, Leslie M. Hoyt; sons, Matthew L. Hoyt (Lindsey), and Joshua Lee Hoyt; grandchildren, Noah, Zoey, and Eliza Hoyt as well as Cruz Hoyt Hammond. Memorials in LaMarr Hoyt’s honor should be presented to the American Cancer Society, P.O. Box 22478 Oklahoma City, OK 73123.

The family of LaMarr Hoyt created this Life Tributes page to make it easy to share your memories.