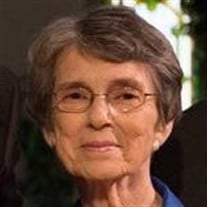 LEXINGTON—Margaret Leah Petree Holder, 87, of Lexington, SC, went to be with the Lord on February 5th, 2019 at Lexington Medical Center in Lexington, SC. Born June 13th, 1931 in Charlotte, NC, she was the daughter of Ralph Ewart Petree, DDS and Margaret Louise Kirk Petree. She was a 1949 graduate of Central High School in Charlotte, NC where she was 1st chair flute in the Central High Band. She graduated from the University of North Carolina Greensboro and earned her BA in English and a minor in Spanish. She married her high school sweetheart, Harry “Duck” Holder on March 21, 1954. As newlyweds, she and Harry were stationed in Alaska during his Air Force days. It was there that she taught in a country schoolhouse for her first teaching position. She went on to teach kindergarten for the remainder of her career, ending in 1992. Harry and Leah moved from Charlotte to Columbia, SC in 1965 where they raised their children and were members of Trinity Presbyterian Church, this was the church in which Leah taught kindergarten for most of her career. They also were members of Hunting Creek Swim and Racquet Club, where Leah enjoyed playing tennis. Harry’s work moved them to Summerville, SC in 1978 and then to Rock Hill, SC in 1981. In both places, Leah continued to be a homemaker and a teacher at parochial kindergartens. They were members of Summerville Presbyterian and First Presbyterian of Rock Hill. Leah was involved in handbell choirs in the churches of which they were members. In 2006 Harry and Leah moved to Lexington to be closer to their sons. They became members of Seven Oaks Presbyterian Church and were very active until 2016 when they decided to become members and attend church with their family at Saxe Gotha Presbyterian Church. Music was the thing that Leah enjoyed most. From early on, she learned to play the piano and the flute, and even after her move to The Presbyterian Home in 2018, she said, going to the musical performances at the home was her favorite thing to do. She is survived by her son, Lane (Terri) of Irmo, SC, son, Kirk (Patty) of Lexington, SC; daughter, Margaret (John) Gunden of Caseville, MI, grandchildren, Kevin (Mellisa) Holder, Harrison (Rachel) Gunden, Kelly (Ryan) Snipes, Anne Holder, Emily (Ryan) Badgerow, Graham (Sarah) Gunden, Gretta Gunden, Robert Holder, Maggie, Iva & Mercy Gunden; Brian (Kendra) Turk, Emily (Tyler) Tisdale and great-grandchildren, Harmony Leah Badgerow, Ilsa Gunden, Harvey Holder, Parker Snipes, Millie, Patrick & Benjamin Turk, and one great-grandchild due in April 2019. She was preceded in death by her husband, Harry Lane Holder; parents, Ralph & Margaret Petree; brother, Ralph Ewart Petree, Jr., and great-granddaughter Eliora Rejoice Badgerow. A service will be held on Saturday, February 9th, 2019, 10:00 a.m. at Saxe-Gotha Presbyterian Church 5503 Sunset Blvd., Lexington, SC 29072.

LEXINGTON&#8212;Margaret Leah Petree Holder, 87, of Lexington, SC, went to be with the Lord on February 5th, 2019 at Lexington Medical Center in Lexington, SC. Born June 13th, 1931 in Charlotte, NC, she was the daughter of Ralph Ewart Petree,... View Obituary & Service Information

The family of Leah Petree Holder created this Life Tributes page to make it easy to share your memories.