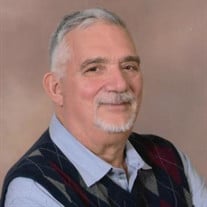 Leo Cardosi, 74 of Lexington, passed away on April 29, 2021, after a brief illness. He was born in Boise, ID June 13, 1946, to Albert Cardosi and Ellen Rose McMikle. He graduated from Tolman High School, Pawtucket, RI. He attended Northeastern University, Boston, MA. Leo joined the Army and served in Vietnam and was awarded the Bronze Star for meritorious achievement in ground operations against hostile forces. After his tour, he served 20 years in the Rhode Island National Guard Field Artillery (Major) and graduated from Providence College Summa Cum Laude. Leo’s career took him to Aiken, SC in 1984 where he became a prominent member of the community, he was active in the Knights of Columbus, he was the plant manager at Gorham Bronze where he developed and obtained a patent on the perpetual light Candle Holder. In 1999 he and his wife moved to Cold Spring, MN where he was plant manager of another bronze manufacturing company. They moved back South in 2005 where they settled. Leo was a Fourth Degree Sir Knight. Member of Our Lady of the Hills Council 6892 and a member of St Michael’s Round Table Ft. Jackson. He was a master at all he did whether it was woodworking, plumbing, electrical, swimming, gardening, fishing, or hunting with his son. But his passion was singing, and he did so with Our Lady of the Hills Traditional Choir and the Palmetto Master Singers. He is survived by his wife of 50 years, Susan Cardosi; daughter, Stephanie (Seve) Cardosi; son, Douglas (Terri) Cardosi; grandsons, Christopher and Logan; brother, Donald (Christine) Cardosi, and sister, Joan (John) Eger. Mass of Christian burial will be held Thursday, May 6, at 10:30 a.m. at Our Lady of the Hills, 120 Marydale Ln., Columbia, SC 29210. The Reverend Peter Sousa, C.Ss.R. will officiate. The family will greet friends from 9:30 a.m. to 10:30 a.m. prior to the service. Burial will be at Ft. Jackson National Cemetery at 1:00 p.m., 4170 Percival Rd., Columbia, SC 29229. In lieu of flowers, memorial donations may be made in honor of Leo to Our Lady of the Hills (Building Fund), 120 Marydale Ln., Columbia, SC 29210 or Palmetto Master Singers, PO Box 7441, Columbia, SC 29202.

Leo Cardosi, 74 of Lexington, passed away on April 29, 2021, after a brief illness. He was born in Boise, ID June 13, 1946, to Albert Cardosi and Ellen Rose McMikle. He graduated from Tolman High School, Pawtucket, RI. He attended Northeastern... View Obituary & Service Information

The family of Leo Cardosi created this Life Tributes page to make it easy to share your memories.