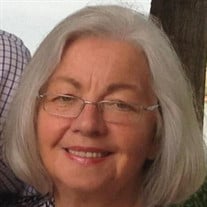 CHAPIN— Marie B. Hutchinson passed away on October 7, 2020, after a long fight with Alzheimer’s and vascular dementia. She was 78. Because of the stipulations centered around the pandemic, the family will hold a private interment and service celebrating her life on October 25 at 1:00 PM at Bush River Memorial Gardens. Born on April 24, 1942, Marie was the second of four children born to Thomas Jefferson Bledsoe and Ernestine Christmas Bledsoe. She lived in Pinehurst, Georgia her first 21 years, graduating from Vienna High School in 1960 and attending South Georgia Technical School in Americus, Georgia where she earned a secretarial degree. She worked as a secretary for two years for Robbins Air Force Base in Warner Robins, Georgia. On June 16, 1963, she wed Curtis R. Hutchinson, Sr. in Pinehurst Baptist Church. Married for 57 years, they spent the first year living in Cocoa Beach, Florida where Curt worked as an electronics technician with RCA at the Kennedy Space Center and Marie worked as a GS5 Secretary with Strategic Air Command for Patrick Air Force Base. After a year, they moved back to Curt’s hometown and lived 37 and a half years in Flatwoods, Kentucky where Curt worked as an electronics technician for Armco Steel and Marie worked as a homemaker. Curt retired from Armco Steel in 2002 and they moved to Chapin, South Carolina on Lake Murray. Marie moved to the Bethany Unit of the Lowman Home in White Rock, South Carolina in 2014. Marie was an active member of Flatwoods Baptist Church for many years where she raised her sons and was a member of the Flatwoods Homemaker’s Club. Most recently until her health made it impossible, she attended Chapin Baptist Church. Family was her life. A devoted daughter, sister, wife, daughter-in-law, mother, mother-in-law, and grandmom, she created a home filled with faith, love, laughter, and song. Marie loved music and was often heard humming hymns and Christmas carols as she went about her day-to-day tasks. An excellent cook and an even better baker, she enjoyed collecting recipes and baking everyone’s favorite cookies, especially at Christmas when everyone got their very own tin filled with their favorites. The light of her life were her grandsons - her three J’s as she lovingly referred to them. She gave them the best gift she could offer; her complete and undivided attention whenever she was with them. And, she made many trips over the years to the baseball fields and football stadiums to cheer them on. If you knew her before this terrible disease you know how very sad this is as she was the rock of our family. In addition to her husband, Marie is survived by her sons, Curtis Hutchinson (Lisa) of Irmo, South Carolina, and Kenneth Hutchinson (Amy) of Spartanburg, South Carolina, grandsons, Jacob Hutchinson (Lindsey) of Greensboro, North Carolina, Justin Hutchinson of Columbia, South Carolina, and Joshua Hutchinson of Charleston, South Carolina; brother, Ronnie E. Bledsoe (Dena) of Vienna, Georgia; sister, Edie Chambless of Summerville, Georgia; sister-in-law, Beth Bledsoe of Unadilla, Georgia, and numerous nieces and nephews. Marie was predeceased by her parents, her brother, Bryce Bledsoe, and her brother-in-law, Pete Chambless. In lieu of flowers, memorial contributions may be made to the Alzheimer’s Association, 140 Stoneridge Drive, #210, Columbia, SC 29210, and an online guestbook is available at https://www.templeshalloranfuneralhome.com/ Last year her grandsons started a Hutchinson #RuntoRemember a Facebook page in honor of their Grandmom to raise both awareness and monetary donations for the Alzheimer’s Association. They will run again in November in memory of their precious Grandmom.

CHAPIN&#8212; Marie B. Hutchinson passed away on October 7, 2020, after a long fight with Alzheimer&#8217;s and vascular dementia. She was 78. Because of the stipulations centered around the pandemic, the family will hold a private interment... View Obituary & Service Information

The family of Marie B. Hutchinson created this Life Tributes page to make it easy to share your memories.