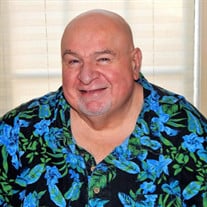 Mark Louis Husted peacefully went to the Lord in the comfort of his home on March 31, 2022. He was the son of the late Warren R. Husted and Camille M. Husted (Agosta) born in Corning, NY on February 27, 1953. He also had a special upbringing with his late grandmother Elizabeth Rose (Ciccotelli) Agosta, whom we all knew as Mum. He was predeceased by his sister, Bernadette (George) Hall. He was baptized in St. Vincent’s Roman Catholic church. He believed in Jesus and God in his heart. He loved his family more than anything, and to hear people laugh, to see people smile, and wanted everyone to be happy. He's survived by his two daughters that he devoted his life to Cassandra J Husted and Nicole C (Matthew) Kennedy of Lexington, SC. He adored and loved his many grandchildren Savannah-Rose N. Schwartz of Corning, NY, Shania L Snyder of Lexington, SC, and Khloe and Bryson Kennedy of Lexington, SC. He had one great-grandson Skyler Louis Spirit of Corning, NY. He loved all of us each for our individual personalities and the love that we brought to him. He’s survived by his nephew Chris (Carey) Hall, nieces Jenna and Marysa Hall, and nephew Ian Hall. He’s survived by several cousins that whom he had a special bond from the Gigliello, Mertson, and McIntoch families that brought him so many memories, laughter, and comfort throughout his life. He volunteered his time to helping the community during the Flood of 1972. He played football for Corning-Painted Post East High School. He graduated from Corning-Painted Post East School in 1973. After graduating he was employed with Corning Glass Works until he retired with 45 service years in glass production. He built many friendships during this time as a referral counselor for Corning Glass Works and as a very active member of the American Flint Glass Workers Union. He was a lead man on tank repairs who believed in treating everyone with dignity and respect. He wore his heart on his sleeve spending time with family and friends. Everyone has always said he was like a cuddly teddy bear. He had a tender heart and soul for everyone. He hugged everyone and always said I love you! He enjoyed his time on Facebook telling everyone Good Morning, sharing motivational quotes, talking with all of his friends making jokes, and sharing political posts that landed him in Facebook jail. He enjoyed going to produce stands and the farmer's markets. He loved spending time at Dunkin Donuts or Crystal City Bakery, where all of us kids would sit for hours while he spent time with friends eating Munchkins donuts. He loved going to dinner with our family and trying out new restaurants. He loved traveling taking the scenic route to Darien Lake Theme Park, and Carlisle, PA going to car shows with Uncle Lenny and all of us kids. He enjoyed shooting pool on the leagues and had several fancy pool sticks. He loved listening to a variety of music and watching movies that would touch the heart. He loved spending holidays with his family and seeing everyone being happy together and loving one another. He was a protective over his family and guided us every single step of the way. He taught us about integrity, respect, and being responsible. He spoke his mind and taught us to do the same. He's predeceased by his nephew, Brett Hall, his aunt, Frances England (Agosta), aunt, Grace McIntosh (Agosta), and aunt, Josephine Green (Agosta). He’s also predeceased by several family and friends that he missed so very much! We know that he’s flying in Heaven with angel wings with his friends and family smiling down on all of us. He’s hugging all of us with his angel wings with love. We are going to miss you so very much until we see you again! We love you so very much!

Mark Louis Husted peacefully went to the Lord in the comfort of his home on March 31, 2022. He was the son of the late Warren R. Husted and Camille M. Husted (Agosta) born in Corning, NY on February 27, 1953. He also had a special upbringing... View Obituary & Service Information

The family of Mark Louis Husted created this Life Tributes page to make it easy to share your memories.

Mark Louis Husted peacefully went to the Lord in the comfort...