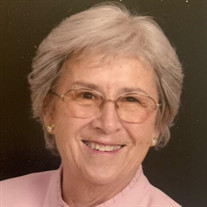 Mildred “Millie” M. Colgan, age 91 of rural Avilla passed away at home on Wednesday, May 4, 2022. Mrs. Colgan was born on February 18, 1931, in Tallassee, Alabama. She married Carroll Colgan on August 17, 1957, in Alabama. He preceded her in death on October 25, 1999. Millie graduated from Phillips High School in Birmingham, Alabama in 1949, and from Howard College (now Samford University) in 1953. She attended one year at New Orleans Baptist Theological Seminary and earned a master's degree in Psychology from Auburn University in Auburn, Alabama. She taught junior high school for a few years before serving as a school psychologist for 25 years for Lexington County School District #5 in South Carolina. Millie and her husband Cal lived in Alabama, Pennsylvania, and Florida before residing for 30 years in South Carolina. Soon after retirement, they moved to Indiana to be with their grandchildren. She became affectionately known far and wide (through her grandchildren) as Wowo. After Cal's death, Millie became a world traveler, seeing Israel, Austria, Germany, Italy, Ireland, Great Britain, Brazil, and Canada. She also enjoyed many stateside travels with her family. A life-long learner and follower of Jesus Christ, she taught Sunday school for over 20 years and endeavored to convince everyone she knew to follow Jesus and to continually read God's Word, the Bible. Survivors include her daughter and son-in-law, Margie and Ted Deal of Avilla; five grandchildren and their spouse; Timothy and Janelle Deal, Joanna and Erik Smith, Rachel and Erik Murray, Libby and Dustin Wegner and Danielle Deal; four great-grandchildren, James Smith, Ezekiel Smith, Judah Smith and Sasha Murray; niece, Crystal Adams of Florida; nephew, Curtis Mann of Alabama. She was preceded in death by her parents, her husband, Carroll Colgan; one brother, Curtis “Woody” Mann, and her twin sister, Margie Hood. Visitation will be held on Monday, May 9, 2022, from 4:00 to 7:00 PM at the Feller and Clark Funeral Home, 1860 South Center Street in Auburn. Funeral services will be held on Tuesday, May 10, 2022, at 10:00 AM at the Feller and Clark Funeral Home in Auburn. The memorial service will take be held at 12:30 p.m., Friday, May 13, 2022, at Temples Halloran Funeral Home Chapel. Memorial Donations may be made to County Line Church of God, Garrett Campus, 105 West Sixth Avenue, Garrett, Indiana 46738, and World Partners, (put Millie’s memorial-Al in the check memo) P.O. Box 9333, Fort Wayne, Indiana 46899.

The family of Mildred "Millie" M. Colgan created this Life Tributes page to make it easy to share your memories.