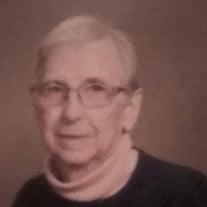 IRMO—The graveside inurnment for Mrs. Nannie Ruth Bouknight Adams, 90, of Irmo, will be held on Monday, December 28, 2020 at 11:00 a.m. in the Union United Methodist Church Cemetery with Reverend David Anderson officiating. The family requests that service attendees wear blue jeans. Ruth was born in Columbia, SC on December 1, 1930, and transitioned on December 14, 2020. She was the daughter of the late John Everette Bouknight and Eddie Younginer Bouknight. Ruth was a lifelong member of the Union United Methodist Church and had worked for over 22 years at the General Electric Plant in Irmo. Once she met you, and if she liked you, you were part of her family for life. She lived most of her life in Irmo, but did live in the states of Maryland and Georgia, where she resided for her late husband’s work requirements. Her favorite hobbies included gardening, yard work, caring for her chickens, and watching westerns on the television. She enjoyed giving to help others and often made tote bags to give to people. Surviving: daughter, Mary A. Hammond; son, Clifton C. “Chuckie” Adams, Jr.; brother, Johnny L. Bouknight (Petsie); granddaughter, Alexis M. Kyzer; grandson, Quentin M. Kyzer, along with several nieces, nephews, and extended family. Those who preceded her in death: late husband, Clifton C. Adams, Sr.; brothers, Edward and Harold Bouknight; sisters, Mary Alice Stowe and Sara Lindler. Memorials may be directed to Union United Methodist Church, Music Ministry, 7582 Woodrow Street, Irmo, SC 29063.

The family of Nannie Ruth Bouknight Adams created this Life Tributes page to make it easy to share your memories.