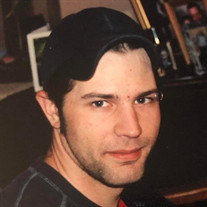 On the 15th of January 2022 at 6:35 a.m. Nicholas Allen Fore entered into eternity in the blessed arms of JESUS. Nick struggled greatly with Acute Myeloid Leukemia during the last 13 months of his life. Throughout this illness Nick’s bravery never wavered. He exhibited great courage through each battle facing blood transfusions, platelet transfusions, and countless bouts of chemotherapy treatments followed by extended hospital stays. Nick was a fighter until the very end. “Pizza Man Nick” was known for his love for cooking and serving as a chef in various entertainment venues in the Capital City, especially in the Five Points area. Not only could Nick make a scrumptious pizza pie, his culinary skills were unmatched thanks to his many years in the food and beverage industry. Nick loved martial arts. He was also a collector of knives and constructed targets to practice knife throwing regularly. He was also versed in music, movies, and television shows. Nick could share facts about movies, name characters from T.V., and recall musical artists and song lyrics instantly from his memory, especially his most favorite show Doctor Who. He also loved the South Carolina Philharmonic Orchestra, the Art Center downtown, and the many arts focused businesses and learning opportunities for the Columbia community. Nick was a proud survivor of a traumatic brain injury. And over the past decade, he learned what true love was, both in giving and accepting it. The Brain Injury Association of South Carolina, Brain Injury Support Group, and ABLE S.C. impacted Nick greatly, and in turn, he was able to pay it forward by loving and supporting others living with a Traumatic Brain Injury. Most of all, Nick knew that he had the unending love and support from family and friends, especially from the Fore and Chavious families. He deeply loved his family especially his husband Bruce Chavious, father Doug and stepmom Gina Fore; sister Candace and brother in law Chris; nephew Hampton, niece, Whaley, as well his brothers, Joshua and Caleb; as well as all of his Aunts and Uncles cousins. Nick was predeceased by his mother, Jaye Harper Rucks; and grandparents, David Earl Fore and Cleo Morgan Fore. Nick will be greatly missed by all family members and all his friends that helped him through this journey called life. Woosah Nicholas! We all love you! A Service of Remembrance will be held on Wednesday, January 19, 2022, at 2:00 p.m. at Temples Halloran Funeral Home, 5400 Bush River Road, Columbia, S.C. 29212. The family will receive friends following the service at the funeral home. A note from Nick's husband, Bruce Chavious: All are invited to celebrate my husband's life together with our family and friends. And as Nick would say at home, "Please mask up for everyone's safety or you will not come in, Covid is still an issue and please keep everyone safe."

On the 15th of January 2022 at 6:35 a.m. Nicholas Allen Fore entered into eternity in the blessed arms of JESUS. Nick struggled greatly with Acute Myeloid Leukemia during the last 13 months of his life. Throughout this illness Nick&#8217;s... View Obituary & Service Information

The family of Nicholas Allen Fore created this Life Tributes page to make it easy to share your memories.