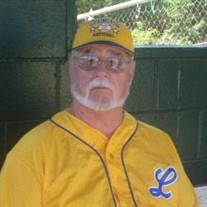 Columbia--Noel Carl Zenoni, son of the late Orien John (Johnny) Zenoni, Sr. and Christine Chesser Zenoni, passed away peacefully on March 20, 2020, after a brief illness at the Agape Hospice House in Columbia, SC. He proudly served in the U.S. Navy aboard the USS George Eastman and USS Mattaponi from 1965-1969. He was known as "Coach" by many of his former players due to the number of years he coached football, baseball, and basketball at the Lexington County Sports Complex. He was born in Ridgeland, SC on December 25, 1945. He was predeceased by his wife, Joyce Sheffield Zenoni and leaves behind his two sons, Michael and Matthew Zenoni, both of Lexington, SC and three beloved grandchildren. He also leaves behind his stepmother, Dorothy Zenoni Smith; brothers, Gerald D. (Mary Jane) Zenoni, Bobby (Maxine) Chesser, Gregory P. Zenoni, Orien John (Terri) Zenoni, Jr, and a sister; Patricia S. (Tim) Shealy. The family would like to thank Jenni-Lynn Assisted Living, the Columbia Veterans Affairs Health Administration and Agape Hospice House for their care and support during his illness. The family would also like to thank the staff of Temples Halloran Funeral Home for their compassion and assistance during this difficult time. Noel shared a special relationship with his brother Jerry and his wife Mary Jane who provided much time, care and support to him for many years. In lieu of flowers, the family asks that donations be made to the charity of one's choice. Noel will be laid to rest next to his late wife, Joyce at Ft. Jackson National Cemetery. In light of the recent Novel Covid-19 Virus, a memorial service will be held at a future date at Temples Halloran Funeral Home Chapel.

Columbia--Noel Carl Zenoni, son of the late Orien John (Johnny) Zenoni, Sr. and Christine Chesser Zenoni, passed away peacefully on March 20, 2020, after a brief illness at the Agape Hospice House in Columbia, SC. He proudly served in the U.S.... View Obituary & Service Information

The family of Noel C. Zenoni created this Life Tributes page to make it easy to share your memories.