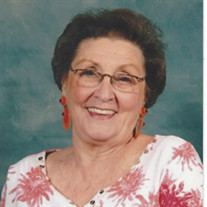 COLUMBIA—Patricia A. “Pat” Pope, 85 of Columbia, passed away on Thursday, August 31, 2017 at Palmetto Health Baptist Hospital. Funeral Services for Patricia “Pat” Amick Pope, 85, of Columbia will be held on Tuesday, September 5, 2017 at 3:00 p.m. at Temples Halloran Funeral Chapel, 5400 Bush River Road, Columbia, South Carolina 29212; conducted by the Reverend LouEllen Benton, with burial to follow at Greenlawn Serenity Gardens. The family will greet friends from 1:00 p.m. until 2:45 p.m. prior to the service at the funeral home. Pat danced into this world on March 18, 1932, she was the daughter of the late John A. and Eula Mae Norton Amick. She graduated from Dreher High School and was married to the late Joseph David Pope for 49 years. She was a member of North Trenholm Baptist Church. As a young girl she sang with the Jimmy Farr Dance band for many years. She also attended Iberia’s School of Cosmetology and was employed by Vogue Stylon. Pat had a wonderful flare for fashion and enjoyed a wonderful career with Parisian Dept. Store at Richland Mall for 12 years. One of her greatest passions was ballroom dancing. She was a member of the National Ballroom Association and a champion ballroom dancer who could be found most any weekend dancing the night away at the Emerald Ballroom, the Lourie Senior Center and other venues. She would want to be remembered as someone who cherished her family and friends and lived life to the fullest each and every day. She lit up every room she entered with her beautiful smile, wonderful sense of humor, ingratiating personality and her love of people. Pat was also involved in Dixie Youth Baseball and an avid fan and supporter of the USC Aiken Pacers watching her grandson play college ball. She is survived by her daughters, Penny Pope Benton (Bill), Robin Melissa “Missey”Aranas (Mark) and grandson, Nicolas “Nick” David Aranas (Cayla) and great-great granddaughter, Ellie Anne. Pat was also preceded in death by her son, Stephen David Pope and brother Jack Amick. She is also survived by several nieces and nephews. In lieu of flowers, memorials may be made to the Junior Diabetes Research Foundation of SC, 1122 Lady Street, #1000, Columbia, SC 29201. On-line condolences may be sent to www.templeshalloranfuneralhome.com

The family of Patricia "Pat" A. Pope created this Life Tributes page to make it easy to share your memories.