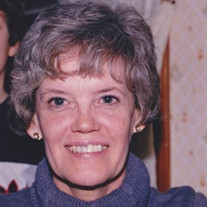 Beloved wife and mother, Patsy Jane Hancock Mitchum died on April 4, 2020 at the age of 82. She is survived by her sons, David Brian Mitchum and Joseph Blake Mitchum. She is predeceased by her two brothers, and her husband, Billy Edgar Mitchum. “Pat” Hancock was born in Charlotte, NC on December 14, 1937. Her family moved to Columbia, SC, where she had her first career picking jurors’ names out of a hat. She was paid $1, a lunch, and a nap at the courthouse. Famously, once she was old enough to enter school, she was forced to retire, with an article in the newspaper celebrating her transition. She graduated from Dreher High School, and once again entered the working world, where she met her husband, Bill Mitchum. Rather than accepting a scholarship, she instead got what she called a “PHT” degree—Putting Husband Through college. After Bill’s graduation, the couple spent years living and working all over North America. Occasionally, they would breeze through Columbia in their convertible Oldsmobile, stealing nieces and nephews away on adventures. When her first child, Blake, arrived, Pat quit her job as a secretary to devote to motherhood full-time. She became Secretary of the neighborhood association, President of the PTA, an excellent Big Wheel mechanic, and a magnificent maker of perloe rice. Once her second child, Brian, was old enough, she returned again to the salaried workforce. After many years and many moves, Pat and Bill returned to Columbia in 1981, where they finally settled, and finished raising their family. Pat eventually retired for the final time from Cooper Industries and became Bill’s caregiver until he passed in 2013. Her favorite activities were gardening, collecting antiques, and filling every possible square inch of her home with Christmas decorations—an activity not to be taken lightly or to be challenged. Her skill with perloe rice, and her devotion to her family and friends never waned. Always working, always kind, and often very sharp, Pat Mitchum loved with the fullness of her heart. She found time and energy for everyone and everything. Her family and friends celebrate her loving spirit and mourn her passing. Pat will be laid to rest next to her husband at Bush River Memorial Gardens on Tuesday, April 6. A memorial service will be held at a later date.

Beloved wife and mother, Patsy Jane Hancock Mitchum died on April 4, 2020 at the age of 82. She is survived by her sons, David Brian Mitchum and Joseph Blake Mitchum. She is predeceased by her two brothers, and her husband, Billy Edgar Mitchum. &#8220;Pat&#8221;... View Obituary & Service Information

The family of Patsy Jane Mitchum created this Life Tributes page to make it easy to share your memories.