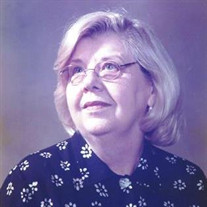 COLUMBIA—Peggy Lucille Gouge, 78, of Columbia, passed away Sunday, June 25, 2017, at Agape Hospice House. She was born April 23, 1939, in Banner Elk, NC, daughter of the late Stella Edna McGuire and Rosler C. Gouge. She grew up in Carter County, Tennessee, and attended Happy Valley High School in Elizabethton. She moved to Pensacola, FL, in 1958. She lived in Centerville, Ohio, from 1966 to 1969 and then returned to Pensacola. She moved to Columbia in 1979. Peggy worked as a bookkeeper and was employed by Livendco in Pensacola and The Carolina Trader in Columbia, retiring in 2015. She was a member of Columbia First Church of the Nazarene and the Neely Friendship Sunday School Class. She enjoyed shopping, travel, children, and was especially fond of her sisters’ great-grandchildren, Jack and Charlie Barrett and Norah Hubbard. She is survived by her sisters, Laura Mae Hyder of Johnson City, TN and Kathleen (William) Barrett of Columbia; two nieces, Terry Hubbard of Johnson City and Jennifer Austin of Jonesborough, TN; six nephews, Ora and David Hyder, both of Johnson City, Patrick Barrett of Columbia, Mike Barrett of Irmo, Ralph Gouge of Maryville, TN and Joe Gouge of Elizabethton and the children and grandchildren of her nieces and nephews. Besides her parents, she was preceded in death by a brother, Zack Leonard Gouge of Elizabethton; two infant brothers, Leonard B. and John William Gouge of Linville, NC; and a brother-in-law, Howard Hyder. The family wishes to thank Carol Watson and Betty Yandle for their constant help and care of Peggy during her illness. Services will be held at 11:00 a.m. Thursday, June 29, 2017 at Columbia First Church of the Nazarene, 901 St. Andrews Road, Columbia, SC 29210 followed by entombment in Bush River Memorial Gardens Mausoleum. Visitation will be held from 10-11 a.m. prior to the service at the church. In lieu of flowers, memorials may be made to Columbia First Church of the Nazarene, 901 St. Andrews Road, Columbia, SC 29210.

The family of Peggy Lucille Gouge created this Life Tributes page to make it easy to share your memories.