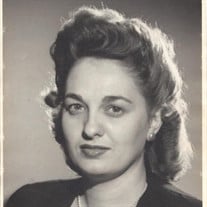 Columbia—Phyllis Gadey Yeoman, 97 of Ballentine, peacefully joined our heavenly father and her beloved husband of nearly 65 years, Thomas R. Yeoman, on August 25, 2020. Born, Phyllis Ursula Gadey, in New York City on September 22, 1922, Phyllis was the daughter of Charles Henry and Helen McGovern Gadey. Mrs. Yeoman graduated from Pearl River (NY) High School in 1941. She attended Plattsburg College before entering the workforce. Throughout her life, mom served and loved her family, her friends, her community, and her nation. Mom sought to serve, continually, with purpose. During WWII she served as first a USO Hostess and later a driver with the American Women’s Voluntary Service (AWVS). After a brief business career, she married the love of her life, Thomas R. Yeoman, on August 16, 1947. They were married for sixty-four years before her Tom was taken from her by cancer in 2012. Making their home in Pearl River they raised three children. She served as a Den Mother, a Brownie Troop Leader, and “school mom” for her children. She was active in the Good Shephard Lutheran Church of Pearl River for over 30 years. She served as a member and leader in the Pearl River (NY) Chapter Order of the Evening Star and as an officer in the Pearl River Junior Women’s Club. Re-entering the workforce in the late 1960s, she was hired by the Orangetown (NY) Police Department as Secretary to the Chief of Police. She was one of the first civilian females in the country to work in a police department. Upon her retirement from the Orangetown Police Department and husband Tom’s retirement from IBM, they moved to Ballentine, SC. She was an active member of Redeemer Lutheran Church; a member of the Ruth Circle, multiple dining out-groups, and the Altar Guild. Phyllis is survived by a son, Tom (III) and Diane Marie Yeoman, son, Chuck and Katie Yeoman; daughter, Stacey Yeoman and her husband Gary Dopirak; six grandchildren, Krista, Ty (Tom IV), Samantha, Rob, Tucker, and Skyler; three step-grandchildren, Jen, Lauren, and Sarah a great-granddaughter, Elizabeth Anne; five step-great-grandchildren; Jason, Gavin, Elliana, David and Ryker, and a large extended family; Christie and Eddie Keschinger, Alyssa Wedaman, Paulette Hopkins, Alan & Nickie Davis, Alexis, and Meredith Davis. The family would especially like to thank the entire staff of caregivers of The Heritage at Lowman Homes, especially those in the Cana Wing of the Health and Rehabilitation Complex and Lutheran Hospice. These caregivers are a special group of professionals who always exhibited patience and kindness with mom and ensured she was treated with dignity during her multiple years as a resident. Due to Covid-19 restrictions, a small family Memorial Service will be held at 11:00 am, Tuesday, September 22, 2020 at Redeemer Lutheran Church. Redeemer Lutheran Church will “live stream” the service for additional family and family friends to view. Internment with her beloved husband Tom in Arlington National Cemetery will be scheduled in the near future. In lieu of flowers, the family requests donations may be made in Memory of Phyllis G. Yeoman to the USO South Carolina, (www.org/columbia 3250 Airport Blvd. Suite 7 West Columbia, SC 29170) or Redeemer Lutheran Church (525 St. Andrews Rd Columbia, SC 29012)

The family of Phyllis G. Yeoman created this Life Tributes page to make it easy to share your memories.