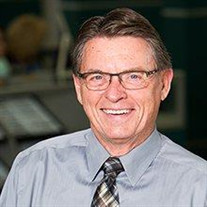 IRMO-The Memorial Service for Ray A. Sansbury, 72, of Irmo, will be held at 4:00 p.m., Saturday, April 13, 2019, at Mt. Horeb United Methodist Church, 1205 Old Cherokee Road, Lexington, SC 29072, with Reverend Bill Childs and Bishop Ken Carder, officiating. His family will receive friends from 2:00 p.m. to 3:45 p.m. at the church. Temples Halloran Funeral Home is assisting the family. Ray was born March 8, 1947, in Florence, SC and passed away on April 9, 2019, surrounded by his loving family at his residence. He was the son of the late Allen J. Sansbury and Ada June Atkinson Sansbury. Ray was a longtime member of Salem United Methodist Church and served on the finance & parish committees. Ray obtained his South Carolina Opticianry License in 1972 and is a former SC Optician of the Year. He was the Chairman of the SC Board of Examiners in Opticianry from August 1991 to August 2007. From 2008 until his passing he served on the Regulatory Review Board for Opticianry for the SC Department of Labor, Licensing and Regulation. He also served as President of the SC Association of Opticians. Ray was a member of the US Tennis Association and was an avid tennis player who was known to frequently play “in the tree”. He loved supporting the Gamecocks and was a Golden Spur donor for the University as well as a Full Scholarship donor since 1976. He was an avid do-it-yourself craftsman, perfectionist, and master of spreadsheets whose negotiating skills were legendary. His passion for his family and his desire to make everyone he met feel valued and loved was unmatched. He was a doting husband, father, grandfather, and friend. Survivors include his loving wife of 50 years, Betty Creach Sansbury of Irmo; sons, David Sansbury (Heather) of Chapin and Brian Sansbury (Shelly) of Chapin; daughter, Lisa Sansbury Dickerson (John) of Irmo; grandchildren, Brock Sansbury (Leigh Ann), Jacob Sansbury, Colby Sansbury, Alise Sansbury, Conner Sansbury, Leila Sansbury, and Olive Sansbury; and his extended family Clint, Susan, Taylor, and Hayden Postell, Randy, Michele, Randi, Tate, Brenley, Bailey, Ricky, and many nieces and nephews. Ray was preceded in death by his parents; and 3 brothers, Ronnie Sansbury, Jerry Sansbury, and Ed Sansbury. In lieu of flowers, memorials may be made to Salem United Methodist Church, 1321 Salem Church Road, Irmo, SC 29063, or Mt. Horeb United Methodist Church, 1205 Old Cherokee Rd. Lexington, SC 29072, or The Courage Center, PO Box 934, Lexington, SC 29071.

The family of Ray A. Sansbury created this Life Tributes page to make it easy to share your memories.

IRMO-The Memorial Service for Ray A. Sansbury, 72, of Irmo, will...