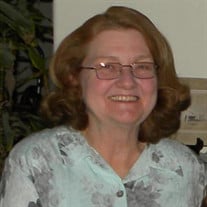 CHAPIN—The graveside service for Rebecca Ann Wafler, 71, of Chapin will be held on Tuesday, July 21, 2020, at 10:00 a.m. in Bush River Memorial Gardens. Rebecca was born in Mobile, Alabama on July 3, 1949, and passed away on July 15, 2020. She was the daughter of the late Fred James Russell and Lorraine Wilhoit Russell. Rebecca was a member of The Church of Jesus Christ of Latter-day-Saints. Rebecca loved traveling her father being in the Air Force, as a young girl she lived in Okinawa, Japan. She loved living at Clark Air Force Base in the Philippine Islands and Stephenville, Newfoundland. She also lived in Alabama, Mississippi, Arizona, California, Kansas, Texas, Kentucky, and South Carolina. Rebecca graduated from Hillcrest High School in Sumter, South Carolina. She went to Spencerian Business College in Frankfort, Kentucky. After college, Rebecca returned to California where she was a secretary at TV Guide Magazine, a Financial Analyst/Cost Estimator at Dalmo Victor and also at Northrop Grumman/ Litton ATD. In 1994 Rebecca and Robert decided to adopt and Rebecca’s focus became her family and she became a Mom. In 2013 they moved to Chapin, South Carolina to be near her family. Survivors include her loving husband of 42 years, Robert H. Wafler; adopted children, Marisa Mayers (Marion), Chelsea Hamlin (Hunter), and Jacob Wafler; sister, Retta Yandle (Stephen); brothers, David Russell, John Russell (Purcid), and Glenn Russell; grandchildren, Oliver and Mallory. Those who preceded her in death besides her late parents were one brother, Fred S. Russell. Because of the COVID Pandemic and the CDC Guidelines, masks are required and social distancing is highly suggested at the cemetery.

The family of Rebecca Ann Wafler created this Life Tributes page to make it easy to share your memories.