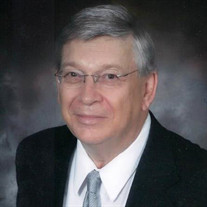 LEXINGTON—The funeral service for Richard David Brigman, 78, of Lexington will be held Friday, January 24, 2020, in the chapel at Temples Halloran Funeral Home, 5400 Bush River Road, Columbia, SC 29212, at 2:00 p.m. Reverend Scott Efird and Reverend Reggie Rowell will officiate. The family will receive friends one hour prior to the service. Inurnment will follow at Bush River Memorial Gardens with military honors. Richard was born September 12, 1941, in Florence, South Carolina, and passed away on January 15, 2020, at his residence, surrounded and comforted by his loved ones. He was the son of the late Laneau M. Brigman and Ila Rogers Brigman. He was a proud graduate of the old Columbia High School. He was a member at Main Street United Methodist Church, where he and Darlene were married, and later became a member of Ashland United Methodist Church. Richard served for 33 years in the SC Air National Guard at McEntire Air Base. He retired as a Senior Master Sergeant. Richard was preceded in death by his sister Mozelle B. Stanton of Columbia, SC, and brother Maj. Laneau “Bud” M. Brigman of Albuquerque, NM. Richard is survived by his loving wife, of 53 years, Hazel Darlene Alewine Brigman; son, Mark L. Brigman of Lexington; and daughter and son-in-law, Laurie and James Veale of Rock Hill. He is also survived by three precious grandchildren, Lawson Veale, Ellery Veale, and Bryn Veale. The family would like to give a heartfelt thank you to Dr. Gerald Fishman, MD, who took special care of Richard for all these years. Thank you to Latoya Tolen, Jennifer, Lindsay, and all the people at Crescent Hill Hospice. They would also like to thank the members of Ashland Methodist Church. We couldn't have taken care of Richard without your help. Memorials may be made to Ashland United Methodist Church, 2600 Ashland Road, Columbia, SC 29210 or to the Parkinson’s Foundation, 200 SC 1st Street, Suite 800, Miami, FL 33131.

The family of Richard D. Brigman created this Life Tributes page to make it easy to share your memories.