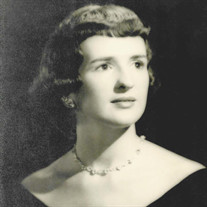 Rita May Shalosky (nee Murrer) was born on December 6, 1932, in Cincinnati, Ohio to the late Marie Hunt Murrer and Herbert Charles Murrer. Rita passed away peacefully at her home on April 26, 2022, following a short illness, surrounded by her loving family. She grew up in Cincinnati, Ohio, graduating from Sacred Heart Academy. She attended the University of Cincinnati where she met her future husband, football standout William “Bill” Shalosky. Rita and Bill married in 1954, and moved often as Bill’s football coaching career took them from the University of Cincinnati to Louisiana State University, West Point, and finally Columbia, where Bill coached the University of Scout Carolina Gamecocks. Rita supported her husband’s busy career while raising their two children, Michael and Kathy. She was a loving daughter, sister, wife, mother, grandmother, great-grandmother, and aunt. She took loving care of Bill for 15 years during his long illness. After Bill passed away in 2018, Rita began working with her daughter and son-in-law at their store, Kathy’s Kreations, and was working until the onset of her illness in March. She loved her “new career” and regarded her co-workers and customers as family. Rita was a devout Christian and she lived her faith every day. She never failed to finish a conversation with “I love you.” She will be missed terribly by her family and everyone who was lucky enough to know her. Rita was preceded in death by her husband, William Shalosky; and a brother, H. Scott Murrer. She is survived by her son, Michael G. Shalosky (Susan); daughter, Kathy J. Hall (Craig); granddaughter, Michael David (Miller); grandsons, William A. Shalosky II, William Patrick Hall (Kelly); and great-granddaughter, Addison Hall. She is also survived by her sister-in-law, Angela Murrer; nieces, Laura Murrer (Greg Jarvis), Linda Murrer (David Greener), Diana Murrer (T. Patrick Foy), and nephew H. Scott Murrer (Cherie Marchio). A mass of Christian Burial will be at 10:30 a.m. on Friday, May 6, 2022, at Our Lady of the Hills Catholic Church, 120 Marydale Lane, Columbia, SC 29210. Reverend George Rosario, C.Ss.R., Parochial Vicar will officiate. We want to thank Lisa Price and the caregivers of FirstLight Home Care who provided comfort to Rita and her family during this difficult time. We want to thank Heart of Hospice for mom's care in her final days. In lieu of flowers, donations can be made in Rita’s memory to Leeza’s Care Connection (leezascareconnection.org).

Rita May Shalosky (nee Murrer) was born on December 6, 1932, in Cincinnati, Ohio to the late Marie Hunt Murrer and Herbert Charles Murrer. Rita passed away peacefully at her home on April 26, 2022, following a short illness, surrounded by her... View Obituary & Service Information

The family of Rita M. Shalosky created this Life Tributes page to make it easy to share your memories.