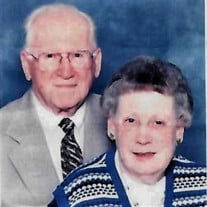 Columbia—A Celebration of Life Service for Robert and Betty Endicott will be held at 1:00 p.m. Monday, February 17, 2020, at Riverland Hills Baptist Church, 201 Lake Murray Blvd., Irmo, SC 29063. Pastor Tim Phillips, officiating. Temples Halloran Funeral Home is assisting the family. Betty was born on November 7, 1930, in Philadelphia, PA, to Thomas and Caroline Oliver. She died February 3, 2020, at home in Columbia, SC. Bob was born on August 14, 1931, in Philadelphia, PA, to Lawrence J. and Vera Endicott. He died June 25, 2019, at home in Columbia, SC. Bob served in the US Navy Reserves from 1948 until he was honorably discharged in 1956. Bob and Betty were married in 1952. They lived in Berlin, NJ, from 1953-1969, and again in 1975-1976. Bob and Betty served as missionaries with The Evangelical Alliance Mission (TEAM) 1969-1974 in Zimbabwe (formerly Rhodesia), Africa. In 1976, they moved to Columbia, SC, where Bob served on staff at Columbia Bible College/Columbia International University until his retirement in 1997. In recent years, until their health declined, they were active members of Riverland Hills Baptist Church and the Agape Class. Betty is predeceased by her parents, Thomas and Caroline Helms Oliver, and her husband Robert (Bob) Lawrence Endicott. Robert (Bob) is predeceased by his parents, Lawrence J. and Vera Smith Endicott Sr.; his brother, Lawrence J. Endicott Jr.; and his sister, Bernice Scipione. They are survived by their daughters, Linda (Ed) Truax and Nancy (Charlie) Dolph, and grandchildren, Debra Dolph, Kathryn Truax, Jonathan Dolph, Kimberly Truax, Christopher (Bonny) Dolph, and Robert Truax. Bob is survived by his sister-in-law, Margaret Endicott. Betty is survived by her sister and brother-in-law, Nancy and John Zimmer. In addition, there are numerous nieces and nephews. Special thanks to Compassionate Care Hospice and their caregivers for their loving care during the past year. In lieu of flowers, please consider sending a donation to either BBN radio (https://bbn1.bbnradio.ord/english.donate/) or Karanda Hospital, Zimbabwe (www.karanda.org/give). Both were ministries they prayed for and supported.

The family of Robert "Bob" Lawrence Endicott created this Life Tributes page to make it easy to share your memories.

Columbia—A Celebration of Life Service for Robert and Betty Endicott...