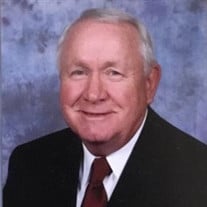 Irmo – Ronald Gunter, 77, beloved husband of Frances B. Gunter and adored father of Vivian Gunter Harper and Ronda Gunter Moore (Robert), passed away on Tuesday, June 27, 2017. Born in Itman, WV he was the son of the late Bud David Gunter and Gaye Goode Gunter. Ron graduated from Concord College in Athens, WV with a BS in Business, and Marshall University in Huntington, WV with an MBA. He proudly served in the Army National Guard, taught economics at Marshall University, and retired after 41 years with the Internal Revenue Service - so he will now know if you’re cheating on your taxes. During his 44 years in Barboursville, WV, Ron was an active member of Pea Ridge United Methodist Church, coached girls’ softball, and loved cheering for the Marshall University Thundering Herd. He was a standout on the golf course, mostly because he bore a strong physical resemblance to Arnold Palmer; however, Ron gained regional notoriety by making two holes in one in one round of golf in Myrtle Beach. Ron and Frances retired and moved to Irmo, SC where they were warmly embraced by the Union United Methodist Church community. He loved travel, the Boston Red Sox, napping on the back porch, and his niece’s chocolate covered cherries. He was a man of integrity and always put his family first. Surviving in addition to his wife and daughters are his brothers Ray Gunter (Dell) of Houston, Texas and Cecil Gunter (Diana) of Port St. Lucie, Florida, along with several nieces and nephews. Funeral services will be held at 1:00 p.m. Friday, June 30, 2017 at Union United Methodist Church, 7582 Woodrow Street, Irmo, SC with a reception following the service. In lieu of flowers, memorials my be given to Amedysis Hospice Care, 1900 Sunset Blvd., Suite 103, West Columbia, SC 29169.

Irmo &#8211; Ronald Gunter, 77, beloved husband of Frances B. Gunter and adored father of Vivian Gunter Harper and Ronda Gunter Moore (Robert), passed away on Tuesday, June 27, 2017. Born in Itman, WV he was the son of the late Bud David... View Obituary & Service Information

The family of Ronald Gunter created this Life Tributes page to make it easy to share your memories.