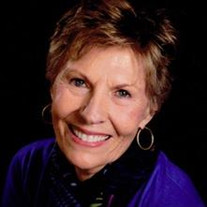 Chapin- On Tuesday, July 22, 2020 God called our beautiful, beloved Sallie Simmons Fravel to come away with Him to her eternal heavenly home free from pain and suffering. Sallie Courtney Simmons was born on November 25, 1941 in West Point, Georgia to Elizabeth McClary Simmons and Shelton Coleman Simmons. Sallie attended Westminster School in Atlanta, Georgia. She received a B.A. in English from UNC Chapel Hill in 1965. Upon graduation she returned to West Point to teach High School English. She soon met William James Fravel, who was stationed at Fort Benning Army base in Georgia and they were married on August 14, 1965. After nine years in the U.S. Army Medical Corp and the birth of two sons they settled in Columbia, South Carolina. Sallie had a passion for her family and her Lord and Savior Jesus Christ. She was known for her love, selflessness, and encouraging nature. She volunteered with many local service agencies including Good Works of Chapin, HIS International, and was involved in many short term mission trips to Haiti and Mexico. Sallie taught bible studies, and enjoyed walking and having lunch with her many friends and loved ones. Sallie was preceded in death by her father, Shelton, and her mother, Elizabeth. She is survived by her husband, Bill; her 2 children, Bill Jr (Sheri) , Coleman (Sheree); six grandchildren, Jamie, Kile, Lindsay, Leighton, Kennedy, and Cara. As well as two brothers, Shelton (Becky) and Ben (Lucy); her cousin Mary McClary Moak (Tom); a nephew, Cole; and three nieces, Allie, Jess, and Charity. A private family memorial service will be held on Sunday, July 26 at 4PM at Grace Point Church in Irmo, South Carolina. Due to Covid 19 this service will be live streamed on the Grace Point Church youtube channel https://www.youtube.com/channel/UCgcXecNC__an_uUghq6ki3g There will also be a private graveside service for the family on Tuesday, July 28, 2020 at 9 AM at Fort Jackson National Cemetery. Memorial donations may be sent to Grace Point Church 11241 Broad River Rd, Irmo, S.C. 29063 for their church missions, or to Good Works, P.O. Box 266 Chapin, SC 29036.

Chapin- On Tuesday, July 22, 2020 God called our beautiful, beloved Sallie Simmons Fravel to come away with Him to her eternal heavenly home free from pain and suffering. Sallie Courtney Simmons was born on November 25, 1941 in West Point,... View Obituary & Service Information

The family of Sallie Simmons Fravel created this Life Tributes page to make it easy to share your memories.