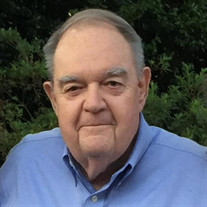 Private graveside services for Sam E. McCuen, 80, of Lexington will be held on Sunday, January 3, 2021 at St. Michael and All Angels Episcopal Church in Columbia. The Rev. Dr. Patrick Riddle, Senior Pastor of St. Stephen’s Lutheran Church in Lexington, will preside. Sam was born in Charlotte, NC on October, 15, 1940 and died in Lexington, SC on December 29, 2020. He was the only child of the late Samuel “Buddy” McCuen and Minnie Harms McCuen Hubbard. He was preceded in death by his wife, and the mother of his daughters, Gretchen Snyder McCuen. After graduating with a Journalism degree from the University of South Carolina, Sam worked for The State newspaper, earning four prestigious Associated Press awards. He also inspired and nurtured hundreds of students as an adjunct professor of Journalism at his alma mater. Sam’s wealth of knowledge in the field of media and communications carried him to seminars across the nation, teaching corporate executives how to engage with the press. In time, his career path led him to serve in South Carolina state government as Public Relations Directors for Department of Corrections and, later, the Highway Department. Never one to sit and wait on life, Sam shared his talents with the city and state by serving on numerous Boards of Directors: SC Philharmonic Orchestra, Palmetto Place Children’s Emergency Shelter, SC Center for Birds of Prey, SC Humanities Council, SC Archives and History Foundation, USC College of Journalism, City of Columbia Parks Foundation, Allen University Educational Foundation, and Columbia Museum of Art, which in 2019 honored Sam with the John Richard Craft Leadership Award. Throughout his life, Sam was at his best when he connected people with a need to the person or organization who could fill it. He had a knack for bringing diverse individuals and groups together, many of whom he met while advocating for his favorite causes: the arts, history and preservation, science, education, the environment, and civil rights. His depth and breadth of involvement in the Capital City brought him a varied and diverse group of friends, of all faiths, races, and backgrounds. All who knew him will miss his charm, his stories, and his very wicked sense of humor! Sam remarried 25 years ago and is survived by his loving wife, Gina A. McCuen. Left to cherish his wonderful memory are his daughters; Kathryn Huntley (Harry) and Sandra Holland (Scott) of Columbia, SC and Debbie Elmore (Mike) of Cheraw, SC. He also leaves 8 grandchildren; Hunt Huntley (Anne), Baker Elmore (Anna), Fielder Huntley (Elizabeth), McCuen Elmore (Lauren), Sarah Louden (Mike), Kathryn Huntley, Ben Holland, and Jennings Huntley. He had 2 step-daughters; Ginger Davis (Patton) and Elizabeth Trenbeath (Mike), along with 3 step-grandchildren and 3 great-grandchildren. In lieu of flowers, donations may be made to St. Stephen’s Lutheran Church, 119 North Church Street, Lexington, SC 29072 or to the charity of one’s choice. Temples-Halloran Funeral Home is assisting the family. Online condolences may be sent to https://www.templeshalloranfuneralhome.com/

The family of Sam E. McCuen created this Life Tributes page to make it easy to share your memories.