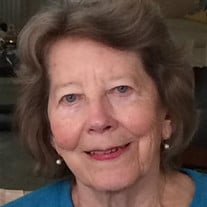 Columbia –A memorial service celebrating the life of Sarah McKella McKinnon Califf will be held at Bethel United Methodist Church, 4600 Daniel Drive, Columbia SC on Saturday, April 13, 2019, 10:30 a.m. Pastor Julie Belman will officiate. Private burial will follow at Clemson University Cemetery Hill, Woodland Cemetery, Clemson, SC. Sarah passed away peacefully at her home on Thursday, February 14, 2019, at the age of 91. She is survived by sons, John W. Califf, III (Pam White) Columbia, SC; Robert McKinnon Califf, MD (Lydia Carpenter), Durham, NC & San Francisco, CA; James Christopher Califf, MD (Laurie Lindsay), Blowing Rock, NC; and daughter, Sarah Caroline Califf (John Phifer), Beaufort, SC; eleven grandchildren, seven great-grandchildren and beloved dog, Daisy. She is also survived by a brother, James Theodore McKinnon, and wife, Barbara along with many cousins, nieces, and nephews. She was predeceased by her husband, John W. Califf, Jr., infant son, Thomas Millford Califf and brother, Robert Kennedy McKinnon. Born in Cross Hill, SC on October 1, 1927, she was the daughter of the late Sarah McKella Watson and the Reverend Robert Hector McKinnon. Sarah spent her formative years in St. George, SC and told many entertaining stories of small-town life as a PK (preacher’s kid). A mischievous green-eyed blonde, she worked at the original Lourie’s while in high school and enjoyed escapades at Edisto Beach with friends. Sarah graduated from Furman University and married John two weeks later on June 12, 1948. After almost twenty years at home raising children, she began a career in education. While teaching she earned a Master of Education degree at the University of South Carolina. Sarah taught third grade at Lonnie B. Nelson and enjoyed close friendships with many of her coworkers after retirement. Sarah was an outspoken advocate for and defender of those people and causes she held dear, and there are numerous anecdotes of her giving the treatment to anyone she felt deserving – from phone calls to coaches on behalf of her sons to a note dropped in the Senate mailbox of a certain disrespectful United States senator after son Robert’s FDA Commissioner hearing. She was devout in her beliefs as a Progressive Christian and enjoyed the study of religion. A longtime member of Bethel United Methodist Church, she was an active member of the UMW and the Belle Dent Circle, serving in various leadership positions over the years. A voracious reader, she enjoyed participating in the Cooper Branch Library Book Club and was looking forward to the delivery of their next book at the time of her passing. Sarah was a dedicated volunteer with various groups in Columbia that supported her strong belief in helping the less fortunate, including the Free Medical Clinic, Providence Hospital and delivering Meals on Wheels with John to many younger clients on their route. The family would especially like to express our sincere thanks to the staff at SCOA who cared for her over eight years living with Multiple Myeloma, notably Chaudhry M. Mushtaq MD, Kitra Nichols FNP, and Linda Byars RN. We also appreciate the patience, devotion, and friendship of neighbor Brant Purvis, long-time helper Laura Amick and of Day Break staff, most notably Senteria Ways. Memorials may be made to: Multiple Myeloma Research Foundation, PO Box 414238, Boston, MA 02241-4238, or Bethel United Methodist Church - Missions, 4600 Daniel Drive, Columbia SC 29206 or Columbia Animal Services, 127 Humane Lane, Columbia, SC 29205

The family of Sarah McKella McKinnon Califf created this Life Tributes page to make it easy to share your memories.

Columbia –A memorial service celebrating the life of Sarah McKella...